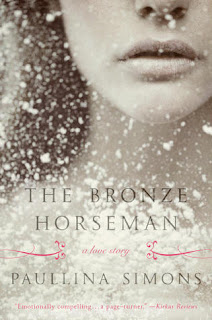 The golden skies, the translucent twilight, the white nights, all hold the promise of youth, of love, of eternal renewal. The war has not yet touched this city of fallen grandeur, or the lives of two sisters, Tatiana and Dasha Metanova, who share a single room in a cramped apartment with their brother and parents. Their world is turned upside down when Hitler's armies attack Russia and begin their unstoppable blitz to Leningrad.

Yet there is light in the darkness. Tatiana meets Alexander, a brave young officer in the Red Army. Strong and self-confident, yet guarding a mysterious and troubled past, he is drawn to Tatiana—and she to him. Starvation, desperation, and fear soon grip their city during the terrible winter of the merciless German siege. Tatiana and Alexander's impossible love threatens to tear the Metanova family apart and expose the dangerous secret Alexander so carefully protects—a secret as devastating as the war itself—as the lovers are swept up in the brutal tides that will change the world and their lives forever.

Here is a book that has been getting rave reviews citing as an epic historical love story. It’s the love story part that had me hesitate to pick up and of course all the hype. In the end I grabbed the audiobook which comes in just over 30 hours. John Lee is the reader and he did a stellar job, though I wonder sometimes if his emotional presentation might have been over the top a few times (refers to comments below).

It’s 1941 when 17-year-old Tatiana’s story begins in Leningrad. The war is in full swing and this book gave a great glimpse of what was like for its citizens. What transpires is horrible and the author describes it authentically and with feeling. The characterization was spot on, those I loved, those I didn’t and I could feel the desperation. The plot played out nicely and I loved the uniqueness of the storyline.

Then I hit somewhere around the 50/60% mark and wham! Everything changed, now I’m not a prude, I get sex in books - when it’s warranted but jiminy cricket, a 100 or so pages of it was just way-way too much. I got the message the first time and really didn’t need to be hit over the head again and again. It changed my feeling for one of the characters, in a bad way - I could say more but that would send me into spoiler mode. I know I am going way against the flow with this one, so many 5 star reviews, but that disrupted the flow and I struggled to be invested like I was previously.

I really enjoyed the historical aspect a lot, it’s rare that I read much from the Russian side of the war so this was a treat. The last 10% picked up again, leaving a sequel necessary. In time I might read it but not right away.


This book was part of my 2019 reading of my shelf challenge.

Posted by Margaret @ JustOneMoreChapter at 9:31 AM