Guestpost: Flask of the Drunken Master by Susan Spann

As long as I can remember, I’ve been drawn to ponds with colorful fish, especially the Japanese painted koi. They glide through the water with the grace of kings, but beg like children when people approach with treats. 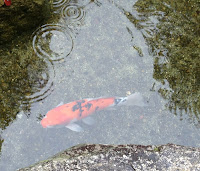 The word “koi” is actually Japanese for “carp.” In Japan, the colorful ones in ponds are nishikigoi, or “brocaded carp,” and although they originated as food, the Japanese have kept them as domesticated ornamental fish for hundreds of years.

When plotting my Shinobi Mystery series, I wanted at least one character to share my appreciation for ornamental fish. Since my ninja detective, Hiro, has a kitten, it only made sense to give the love of fish to Hiro’s partner in crime (solving), Portuguese Jesuit Father Mateo. 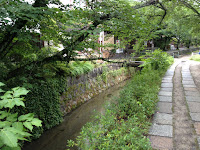 Father Mateo’s koi pond sits in the yard behind the house where both detectives live, and though the fish play only a token part in the series, they are a very common feature of ornamental ponds in Japan. Technically, the fish in Father Mateo’s pond would probably have been ornamental goldfish, rather than true koi (domesticated carp), because brocaded koi were not commonly kept as pets in the medieval era. However, given the difficulties involved in explaining the differences between brocaded koi and medieval-age domesticated goldfish (many of which bear strong resemblance to the modern koi)— I opted for simplicity and went with “koi.”

During my recent research trip, I realized, yet again, exactly how prevalent these lovely fish are in Japanese gardens.

Shoguns often placed koi in the ponds adjacent to their private gardens; we saw several swimming in this lovely pond in the garden outside Ninomaru Palace, on the grounds of Nijo Castle in Kyoto.

They have little fear of humans, and beg shamelessly for treats, which makes them easy to photograph—like this large school at Kyoto’s Eikan-do Temple. 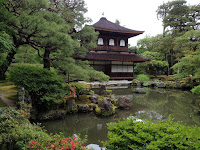 Wild koi swimming in the canal along the philosopher’s path, a 2-mile trail that winds past several of Kyoto’s famous shrines and temples. Within two generations, many lose their lovely colors and revert to solid, darker shades that provide more camouflage.

The loveliest koi I saw in Japan were swimming in a pond outside Ryokan Iwaso on Miyajima, a sacred island off the coast of Hiroshima. Not only did these fish display the iconic red and white patterning so common in Japanese paintings, but their large size and calm demeanor made them peaceful to watch. Add in early morning rain, and it’s hard to imagine a more idyllic scene.

The tranquil atmosphere of Father Mateo’s koi pond lends a pool of calm to the often-frantic pace of investigations in my Shinobi Mystery series—a place for silent reflection in the midst of a dangerous time and city. During my visit to Japan, it was lovely to see that koi still fill that role in Japanese gardens—old and new—and to spend some time in the presence of these beautiful, iconic fish. 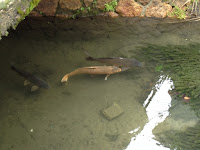 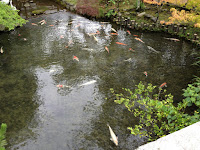 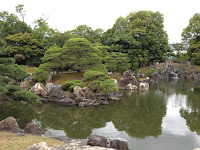 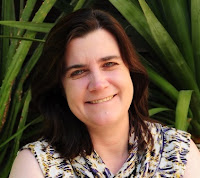 Susan Spann writes the Shinobi Mysteries, featuring ninja detective Hiro Hattori and his Portuguese Jesuit sidekick, Father Mateo. Her debut novel, CLAWS OF THE CAT (Minotaur Books, 2013), was a Library Journal Mystery Debut of the Month and a finalist for the Silver Falchion Award for Best First Novel. BLADE OF THE SAMURAI released in 2014, and her third novel, FLASK OF THE DRUNKEN MASTER, releases on July 14, 2015. Susan is also a transactional attorney whose practice focuses on publishing law and business.

When not writing or practicing law, she raises seahorses and rare corals in her marine aquarium. You can find her online at http://www.SusanSpann.com, on Twitter (@SusanSpann), and on Facebook (SusanSpannAuthor). 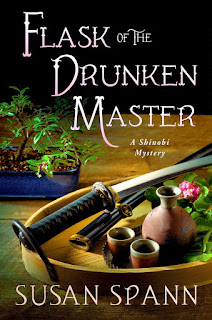 August 1565: When a rival artisan turns up dead outside Ginjiro’s brewery, and all the evidence implicates the brewer, master ninja Hiro Hattori and Portuguese Jesuit Father Mateo must find the killer before the magistrate executes Ginjiro and seizes the brewery, leaving his wife and daughter destitute. A missing merchant, a vicious debt collector, and a female moneylender join Ginjiro and the victim’s spendthrift son on the suspect list. But with Kyoto on alert in the wake of the shogun’s recent death, a rival shinobi on the prowl, and samurai threatening Hiro and Father Mateo at every turn, Ginjiro’s life is not the only one in danger.
Will Hiro and Father Mateo unravel the clues in time to save Ginjiro’s life, or will the shadows gathering over Kyoto consume the detectives as well as the brewer?
Flask of the Drunken Master is the latest entry in Susan Spann’s thrilling 16th century Japanese mystery series, featuring ninja detective Hiro Hattori and Jesuit Father Mateo.

Praise for Claws of the Cat

“Spann matches period detail with a well-developed whodunit plot in her promising debut, the first in a new series set in 16th-century Japan.”

Book One: Claws of the Cat (Library Journal Mystery Debut of the Month)
Book Two: Blade of the Samurai
Book Three: Flask of the Drunken Master

Posted by Margaret @ JustOneMoreChapter at 10:07 PM