Lost in the Barrens by Farley Mowat 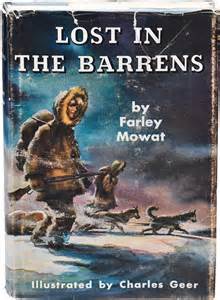 Awasin, a Cree Indian boy, and Jamie, a Canadian orphan living with his uncle, the trapper Angus Macnair, are enchanted by the magic of the great Arctic wastes. They set out on an adventure that proves longer and more dangerous than they could have imagined. Drawing on his knowledge of the ways of the wilderness and the implacable northern elements, Farley Mowat has created a memorable tale of daring and adventure.


When first published in 1956, Lost in the Barrens won the Governor-General’s Award for Juvenile Literature, the Book-of-the-Year Medal of the Canadian Association of Children’s Librarians and the Boys’ Club of America Junior Book Award.


When I think of great Canadian authors Farley Mowat always comes to mind.  He was well known for his books on Northern Canada and the great outdoors as well as animal stories for kids (though enjoyed by all ages).

I found the HC 1st edition at one of my favorite thrift stores which is apparently the same copy hubby had as a kid.  It is illustrated and added that extra spark to this coming of age story.

I loved this book! and could see myself reading it again and again.  It's a story of the friendship between Awasin (A Cree Indian) and Jamie (former city boy).  What starts out as a two week trip turns into so much more.  Set in the the harsh wilderness of the Artic I had no problem visualizng so much, and could feel the cold bitter winter.

The different backgrounds of these 2 lads and their wisdom (or lack thereof at times) balanced the plot.  A story of friendship not just between Jaime and Awasin but between people and the land.  This is really my first glimpse at the Cree tribe ad I enjoyed learning of their customs, superstitions and way of life. It's about survival when hope is dim and working as a team, having respect for nature and each other.

Though this is an older book, first published in 1956, its an adventure that you don't see much of these days.  I highly recommend Lost in the Barrens not just to MG and up but adults as well.  Farley Mowat has a way with words that I like, he tells it like is in a real and believable manner.   His appreciation for nature is evident in his writing. Farley McGill Mowat was a conservationist and one of Canada's most widely-read authors.

Many of his most popular works have been memoirs of his childhood, his war service, and his work as a naturalist. His works have been translated into 52 languages and he has sold more than 14 million books.

Posted by Margaret @ JustOneMoreChapter at 2:36 PM