A Measure of Light by Beth Powning 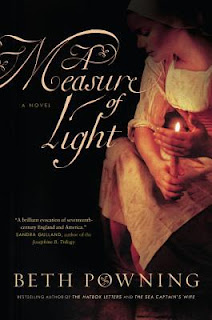 In her most dramatic and ambitious novel yet, bestselling author Beth Powning re-imagines the life of Mary Dyer, a Quaker who defied death to champion religious freedom during America's earliest years.

Set in 1600s New England, A Measure of Light tells the story of Mary Dyer, a Puritan who flees persecution in Elizabethan England only to find the Puritan establishment in Massachusetts every bit as vicious as the one she has left behind. One of America's first Quakers, and among the last to face the gallows for her convictions, Mary Dyer receives here in fiction the full-blooded treatment too long denied a figure of her stature: a woman caught between faith, family and the driving sense that she alone will put right a deep and cruel wrong in the world.

This is gripping historical fiction about a courageous woman who chafed at the power of theocracies and the boundaries of her era, struggling against a backdrop of imminent apocalypse for women's rights, liberty of conscience, intellectual freedom and justice.


Published March 10th 2015 by Knopf Canada
personal libary
****
Beth Powning is a 'new to me' author.  I first heard about her via a Sandra Gulland newsletter and then again when Reading the Past did a post on Canadian authors.

The cover is so complying, mysterious and rather haunting, screaming 'read me, read me!'

I knew nothing of Mary Dryer's life before reading this book.  I knew how the Quaker's/Friends were driven out of England but didn't totally grasp the prosecution taking place in New England.  With A Measure of Light the author painted a vivid and emotional picture, which showed the author's knowledge of this time period.  Visualizing what was taking place wasn't hard, Beth Powning has a unique writing style and it wasn't hard to get lost in this book.

The life of Mary Dryer begins in England and continues in America.  Being part of the early settlers in New England was a struggle in and of itself, but add the judgements especially in regards to religion only made for conflict after conflict.  I liked Mary in one sense, seeing her commitment to what she believed in but other times I would have liked to know more of her thought process as to why she did certain things (ie stay in England so long).  I could sympathize with her reluctance to fully commit and love her children and the reasoning behind that. (though could it have been postpartum depression also?).

All in all I really enjoyed this book, this story has stayed with me long after I finished reading it. Definitely an author I would recommend and read more of.

Posted by Margaret @ JustOneMoreChapter at 3:34 PM