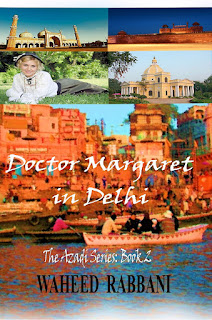 Doctor Margaret in Delhi is Book 2 of The Azadi Series and a sequel to, Book 1: Doctor Margaret’s Sea Chest. This historical fiction novel continues with Margaret’s journey from the time she and her Canadian husband participated in the 1854 Crimean War.

Doctor Margaret travels alone to India to be with her parents at the American Presbyterian Mission at Futtehgurh, and then on to her posting at a hospital in Delhi. There she has to not only overcome work pressures, but also deal with her intimidators and intrigues of the Mughals, at the Delhi Red Fort.

Margaret’s tormenter since her childhood, Captain Albert, also joins a British regiment bound for service in India. The Russian, Captain Count Nicholai, whom Margaret had met in Crimea, also arrives in India under the guise of a French physician. The events leading up to the Indian Mutiny/Rebellion that breaks out in 1857 profoundly affect not only Margaret’s life, but also of those who love her and others’ who wish her harm. Also, mixed-up in the bedlam is one of the Delhi King, Shah Zafar’s, Red Fort’s Guards sepoys, Sharif Khan Bhadur, the grandfather of Doctor Wallidad, an American doctor.

The Azadi Series covers the exciting events and turmoil that enflamed India from 1857 to 1947, and led to her independence. Those incidences engulf the characters of this story at that time, and then later their descendant’s lives, again in the 1960s.


Publication Date: May 5, 2015
Historical Novels Publishing
Formats: eBook, Paperback
308 Pages
Series: The Azadi Trilogy
Genre: Historical Fiction
****
There are a number of reasons why I wanted to read this book.  Foremost I love discovering new authors, ones that I wouldn't have found on my own and for that I am very grateful to Amy at Historical Fiction Virtual Book Tours for the invite to join this tour.  Location, location, location, yup that's a big one for me also.  India is a country that I am fascinated with, the occupation of the British and their separation, it's a part of history that I am slowly learning about.  A small portion of this book takes place in a little (well not that little) town, Grimsby, on the south shore of Lake Ontario - I grew up in Grimsby, still have family there in fact and I live not too far away - so that was a BIG bonus for me.

Doctor Margaret in Delhi is book 2 in The Azadi Series, I was a little worried about not reading the first book, but it was fine.  But I will go back and read Book 1: Doctor Margaret's Sea Chest before continuing on with the 3rd book just because there were a few details that I wished I knew more about.

I really enjoyed this book, the author made me care about Margaret and her plight.  He wrote of her struggles, a recent widow meeting up with her family in India.  Things weren't easy during the time period depicted here, especially for women. The fact that she was a doctor impressed me.  Told from her point of view it wasn't hard to really get to know Margaret and feel her emotions.  She is strong and undaunted but at the same time vulnerable and on her own.  It isn't a fast paced book, but rather plotted along at an even pace that kept me entertained and curious about the outcome.

It ended in a good place leaving this reader anxious for more.  Highly recommend to those that like HF from this era and location.


Praise for Doctor Margaret in Delhi

“Excellent historical fictional setting, voice and tone. Not my normal reading diet, but your voice is compelling. Overall impression: it seems to be a novel one may settle into and relax for a delightful journey–(Spoiler alert) with a cobra and lots of new Indian vocabulary in store. Interesting bit about Robert Clive and the East India Company. Seems it’s a story that should be told.” – J.T.Bleu

"I have both traveled extensively in India, as well as have researched both past- and present-day India. I found this novel to be not only entertaining, but quite accurate in its portrayal of a highly complex and constantly evolving country. Margaret is an impressive heroine who must navigate this landscape, and deal with men who don't have her bests interests at heart. I would definitely recommend this well-written novel. I learned from it, and I enjoyed it." - 5-star Amazon review by Read More Books

Doctor Margaret in Delhi Available at 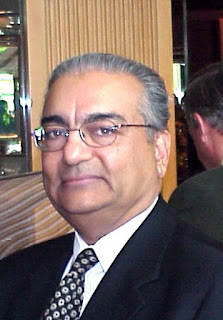 Waheed Rabbani was born in India, close to Delhi, and was introduced to Victorian and other English novels, at a very young age, in his father’s library. Most of the large number of volumes had been purchased by his father at ‘garage sales’ held, by departing British civil service officers, in the last days of the Raj.
Waheed attended St. Patrick’s High School in Karachi, Pakistan. He graduated from Loughborough University, Leicestershire, England, and received a Master’s degree from Concordia University, Montreal, Canada. While an engineer by profession, Waheed’s other love is reading and writing English literature, which led him to obtain a Certificate in Creative Writing from McMaster University and start on his fiction writing journey.

Waheed and his wife, Alexandra, are now settled on the shores of Lake Ontario in the historic town of Grimsby. More information is available on his website.