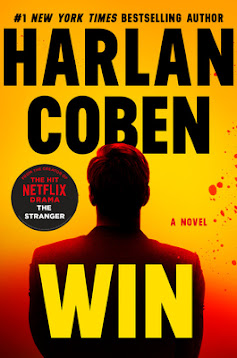 From a #1 New York Times bestselling author comes this thrilling story that shows what happens when a dead man's secrets fall into the hands of vigilante antihero—drawing him down a dangerous road.

Over twenty years ago, the heiress Patricia Lockwood was abducted during a robbery of her family's estate, then locked inside an isolated cabin for months. Patricia escaped, but so did her captors — and the items stolen from her family were never recovered.

Until now. On the Upper West Side, a recluse is found murdered in his penthouse apartment, alongside two objects of note: a stolen Vermeer painting and a leather suitcase bearing the initials WHL3. For the first time in years, the authorities have a lead — not only on Patricia's kidnapping, but also on another FBI cold case — with the suitcase and painting both pointing them toward one man.

Windsor Horne Lockwood III — or Win, as his few friends call him — doesn't know how his suitcase and his family's stolen painting ended up with a dead man. But his interest is piqued, especially when the FBI tells him that the man who kidnapped his cousin was also behind an act of domestic terrorism — and that the conspirators may still be at large. The two cases have baffled the FBI for decades, but Win has three things the FBI doesn't: a personal connection to the case; an ungodly fortune; and his own unique brand of justice.

Hardcover, 375 pages
Audiobook, 10 hrs, 35 minutes
Published March 16th 2021
by Grand Central Publishing
4/5 stars
I am a relatively new Harlan Coban fan, I thoroughly enjoyed his books The Boy From the Woods and  The Match. When I started reading Win there were familiar names and mannerisms from my two previous reads, which has me itching to read more of his books. That being said this is the beginning of a new series.
This ended up being an audio read for me, I did start reading it but felt the narrators voice reflected the character and made for a very enjoyable listen. Steve Weber was the narrator.

Win a.k.a. Windsor Horne Lockwood III, is a mysterious character with loads of money, not much of a conscience and thinks himself smarter than most. What follows is an intriguing story that involves the past that his family would like to forget, with old wounds, old mysteries and family strife. This tightly woven story was suspenseful with some witty banter to relief tension at the opportune moments.

I already have a copy of  Deal Breaker, the beginning of the Myron Bolitar Series which also features Win, but in no way do you have to read it first.
I won this book from Grand Central Publishing back when it was first released.
Posted by Margaret @ JustOneMoreChapter at 6:00 AM