An Impossible Impostor by Deanna Raybourn 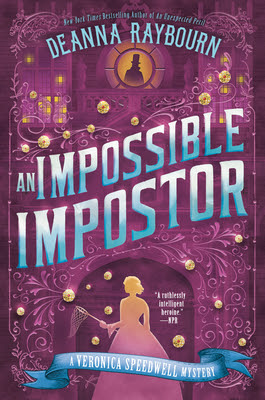 While investigating a man claiming to be the long-lost heir to a noble family, Veronica Speedwell gets the surprise of her life in this new adventure from the New York Times bestselling and Edgar Award-nominated author Deanna Raybourn.

London, 1889. Veronica Speedwell and her natural historian beau Stoker are summoned by Sir Hugo Montgomerie, head of Special Branch. He has a personal request on behalf of his goddaughter, Euphemia Hathaway. After years of traveling the world, her eldest brother, Jonathan, heir to Hathaway Hall, was believed to have been killed in the catastrophic eruption of Krakatoa a few years before.

But now a man matching Jonathan's description and carrying his possessions has arrived at Hathaway Hall with no memory of his identity or where he has been. Could this man truly be Jonathan, back from the dead? Or is he a devious impostor, determined to gain ownership over the family's most valuable possessions--a legendary parure of priceless Rajasthani jewels? It's a delicate situation, and Veronica is Sir Hugo's only hope.

Veronica and Stoker agree to go to Hathaway Hall to covertly investigate the mysterious amnesiac. Veronica is soon shocked to find herself face-to-face with a ghost from her past. To help Sir Hugo discover the truth, she must open doors to her own history that she long believed to be shut for good.

Kobo, 325 pages
Published February 15, 2022
by Berkley Books/Penguin RandomHouse
4/5 stars
Veronica and Stoker are one of my favourite fictional couples, I've been a faithful reader as each book comes out, and even reread a couple. In this, book 7, which was released back in February and somehow I neglected to post my review. So here it is.

The Impossible Imposter is a revealing story, as the blurb says not only does Veronica get the surprise of her life in this new venture but this reader was shocked as what was revealed and actually read that part numerous times to let it sink in.

Veronica agrees to help a friend's goddaughter investigate whether the long lost heir to Hathaway Hall is indeed who says he is or an imposter. What follows is typical Veronica and Stoker mayhem.

Just when you think the author can’t come up with another unique adventure for these two she does it again.  An Impossible Imposter is an intriguing story both mysterious and tantalizing, while it might lack some of the usual banter it is still entertaining.  As for the ending, well lets just say I am really looking forward to March 7, 2023 when A Sinister Revenge releases.
My copy was obtained through my public library.
Posted by Margaret @ JustOneMoreChapter at 6:00 AM