The Weight of Blood by Tiffany D. Jackson 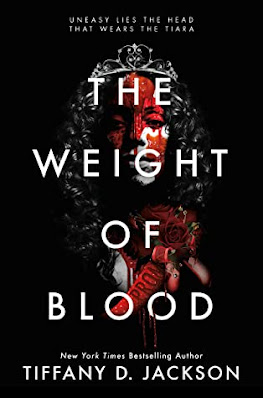 New York Times bestselling author Tiffany D. Jackson ramps up the horror and tackles America’s history and legacy of racism in this suspenseful YA novel following a biracial teenager as her Georgia high school hosts its first integrated prom.

When Springville residents—at least the ones still alive—are questioned about what happened on prom night, they all have the same explanation . . . Maddy did it.

An outcast at her small-town Georgia high school, Madison Washington has always been a teasing target for bullies. And she's dealt with it because she has more pressing problems to manage. Until the morning a surprise rainstorm reveals her most closely kept secret: Maddy is biracial. She has been passing for white her entire life at the behest of her fanatical white father, Thomas Washington.

After a viral bullying video pulls back the curtain on Springville High's racist roots, student leaders come up with a plan to change their image: host the school's first integrated prom as a show of unity. The popular white class president convinces her Black superstar quarterback boyfriend to ask Maddy to be his date, leaving Maddy wondering if it's possible to have a normal life.

But some of her classmates aren't done with her just yet. And what they don't know is that Maddy still has another secret . . . one that will cost them all their lives.

Kindle Edition, 416 pages
Expected publication: September 6th 2022
by HarperCollins/Tegen
3/5 stars
Both the author and genre (YA Horror) are new to me.  Social media was not quiet in terms of what type of retelling this was, so I began reading with a pre-conceived notion of what was going to happen.  Though once I started it wasn’t hard to figure out how this book would end. Not just because of the spoilers online but because of the format. Told from a couple different points of view and also through interview/excerpt pages from a book, told much of the story before it happened eliminating any element of surprise.

The Weight of Blood is a story of racial unrest, bullying and dysfunctional families. It was hard to read at times and though it takes place in 2015 I felt like it went farther back into the 60’s with the segregation of races. There were a lot of characters here and at times I struggled to connect with who was who.

Deemed as a horror book I was looking for the fright, things that go bump in the night or just anything to invoke that feeling of scariness.  And not just with the ending, but throughout the story. But I didn’t feel that vibe and honestly (I know I am going against the general response to this book, could be an age thing) but I didn't feel any type of emotion other than sadness for the main character and Kenny.
The Weight of Blood reminds me of Mean Girls meets Firestarter meets Carrie. It's a racial bullying story with some supernatural elements.  The way the story jumped around disrupted the flow leaving me craving just to read the main story and not the interviews and other fillers.
My thanks to HarperCollins CA for a digital arc (via Netgalley) in exchange for a honest review.
Posted by Margaret @ JustOneMoreChapter at 6:00 AM

Email ThisBlogThis!Share to TwitterShare to FacebookShare to Pinterest
Labels: 2022, ARC, Harper Collins, Netgalley, New to me author, Tiffany D. Jackson, YA, YA Horror