The Truth About Ben and June by Alex Kiester 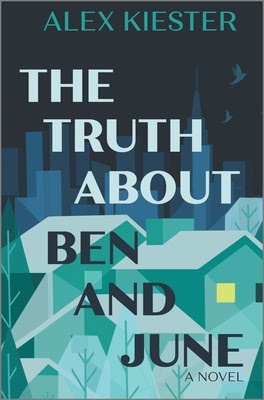 A heartfelt debut that explores the complexity of a modern-day marriage when a new mother vanishes one morning and her husband must retrace events of their recent past to bring her home.

Love isn’t something that happens to you; it’s something you must choose every day.

From the moment Ben and June met in a hospital waiting room on New Year’s Eve, their love has seemed fated. Looking back at all the tiny, unlikely decisions that brought them together, it was easy to believe their relationship was special. But now, after several years of marriage, June is struggling as a new mom. At times, she wonders about the life she didn’t choose—what might have been if she hadn’t given up the lead role in a famous ballet to start a family. Feeling like a bad mom and more alone than ever, she writes to her deceased mother, hoping for a sign of what she should do next.

One morning, Ben wakes to the sound of his baby and quickly realizes that June is gone, along with her suitcase. As Ben attempts to piece together June’s disappearance, her new friends mention things he knows nothing about—a mysterious petition, June’s falling-out with another mom, her strange fixation on a Greek myth. The more Ben uncovers about June, the more he realizes how little he actually knows her. And now the only way to bring June home is to understand why she left.

Told through alternating perspectives of husband and wife, The Truth About Ben and June is a witty and wise page-turner about life’s many crossroads and a heartfelt reminder that we create our own destiny.

Paperback, 320 pages
Expected publication June 28, 2022
by Park Row
3/5
The Truth About Ben and June is a thought-provoking story that explores issues that are real and sometimes overlooked.

Told from Ben’s POV and also from letters June wrote to her deceased mother. June talks a lot about the Greek tragedy Medea (I’m not a big fan of Greek mythology but this kind of worked here). New parents Ben and June are an interesting couple and while I struggled to connect with Ben I did feel for June, both before and after the birth of their son. Her struggles were vividly expressed in her letters and I could feel her pain.

The Truth About Ben and June is a story of relationships, whether between husband and wife, mother and daughter, and between friends. This last relationship I struggled with and can’t quite figure out why.

The book started out strong with the mysterious disappearance but slowed down, though my interest was there as I was genuinely curious as to what happened. A good debut that would make a good book club read for a variety of discusses. The ending was okay somewhat convenient and though I didn’t connect (or like) Ben or Kirsten that might have affected my thoughts
My thanks to Park Row Books and Harper Collins Canada for a print ARC (in exchange for a honest review.)  The Truth About Ben and June can be found in book stores next week.
Posted by Margaret @ JustOneMoreChapter at 6:10 PM