Every Summer After by Carley Fortune 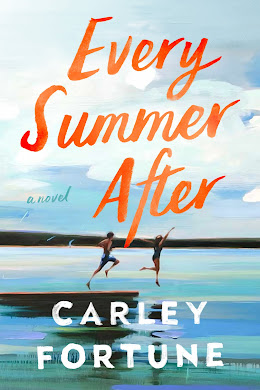 Six summers to fall in love. One moment to fall apart. A weekend to get it right.

They say you can never go home again, and for Persephone Fraser, ever since she made the biggest mistake of her life a decade ago, that has felt too true. Instead of glittering summers on the lakeshore of her childhood, she spends them in a stylish apartment in the city, going out with friends, and keeping everyone a safe distance from her heart.

Until she receives the call that sends her racing back to Barry’s Bay and into the orbit of Sam Florek—the man she never thought she’d have to live without.

For six summers, through hazy afternoons on the water and warm summer nights working in his family’s restaurant and curling up together with books—medical textbooks for him and work-in-progress horror short stories for her—Percy and Sam had been inseparable. Eventually that friendship turned into something breathtakingly more, before it fell spectacularly apart.

When Percy returns to the lake for Sam’s mother’s funeral, their connection is as undeniable as it had always been. But until Percy can confront the decisions she made and the years she’s spent punishing herself for them, they’ll never know whether their love might be bigger than the biggest mistakes of their past.

Told over the course of six years and one weekend, Every Summer After is a big, sweeping nostalgic look at love and the people and choices that mark us forever.

Paperback, 320 pages
Published May 10, 2022
by Berkley
5/5 stars
Are you on Instagram?  Then I am sure you have seen all the hype for Every Summer After by debut author Carley Fortune. It reads nothing like a debut.
I know summer reads are really just whatever you want in the summer time when life tones done and relaxes a little (well hopefully it does). But this book is actually the perfect summer read.  The Canadian setting with cottage country, ice cream shops and the lake grabbed me right away. As did the characters, bookish people spending lazy hazy days on the dock reading, jumping in to cool off and swimming The author put me right there and I didn't want to leave.
Every Summer After is a well written story of relationships, guilt and second chances.  There is wit, realistic bantering and young love in this coming of age story.  Told in dual time periods beginning when Percy is 13 years old. This budding friendship, though predictable (at times) was a pleasure to read - which I might add I did in a matter of days.
Definitely adding Carley Fortune to my auto buy list for her future books.
Posted by Margaret @ JustOneMoreChapter at 7:10 PM