Find You First by Linwood Barclay 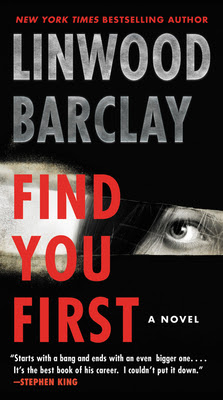 The New York Times bestselling author of Elevator Pitch and master of psychological suspense returns with a riveting thriller in which the possible heirs of a dying tech millionaire are mysteriously being eliminated, one by one.

“Find You First starts with a bang and ends with an even bigger one. . . . It’s the best book of his career.” — Stephen King

Tech millionaire Miles Cookson has more money than he can ever spend, and everything he could dream of—except time. He has recently been diagnosed with a terminal illness, and there is a fifty percent chance that it can be passed on to the next generation. For Miles, this means taking a long hard look at his past . . .

Two decades ago, a young, struggling Miles was a sperm donor. Somewhere out there, he has kids—nine of them. And they might be about to inherit both the good and the bad from him—maybe his fortune, or maybe something much worse.

As Miles begins to search for the children he’s never known, aspiring film documentarian Chloe Swanson embarks on a quest to find her biological father, armed with the knowledge that twenty-two years ago, her mother used a New York sperm bank to become pregnant.

When Miles and Chloe eventually connect, their excitement at finding each other is overshadowed by a series of mysterious and terrifying events. One by one, Miles’s other potential heirs are vanishing—every trace of them wiped, like they never existed at all.

Who is the vicious killer—another heir methodically erasing rivals? Or is something even more sinister going on?

Paperback, 496 pages
Published October 26, 2021
by William Morrow
4.5/5 stars
This is my second Linwood Barclay novel in as many weeks. I loved Take Your Breath Away and immediately dove to this one, fingers crossed that I would get the same five star read. Maybe not five stars but pretty darn close with 4 1/2 stars.

Miles Cookson has just been handed a diagnosis nobody wants, it sets him on a journey to the past with deadly repercussions. Intermixed with other POVs I found this to be a mysterious, entertaining story with a unique premise and its well written.

To say I’m a new Linwood Barclay fan would be an understatement. I enjoy his writing, he knows how to draw me in with the mystery, keep me captivated with the twists and turns as well as keeping me on my toes as I try to unravel what is going on, not an easy task with the many layers.

Find You First is a story of longing, corruption/greed and family. There were characters I liked and others not so much

If you are in Canada and want to give this author a try, for the month of June his books are all on sale at Chapters and you can even pre-order his new release entitled Look Both Ways which releases in October.