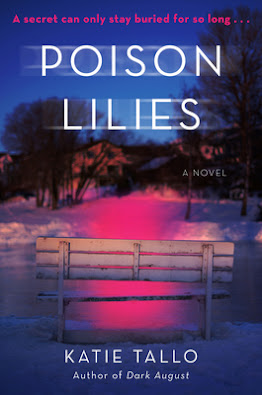 In Katie Tallo's thrilling follow-up to the international bestseller Dark August, Gus Monet is swept into the orbit of a prominent, wealthy family whose privilege is founded on a dangerous web of secrets they're desperate to keep hidden

After moving back to her hometown and solving her mother's murder, August (Gus) Monet thought she was done. Settled. Content for the first time in her life.

She made a mistake she couldn't undo, so Gus cut and run. Packed all her things in the dead of night and took off. Now somewhat settled into The Ambassador, an art-deco apartment building with cheap rent in one of Ottawa's oldest neighborhoods, Gus has found the perfect place for a fresh start—or a good place to hide.

Gus also finds friendship in Poppy Honeywell, her reclusive neighbor perpetually wrapped in a pink kimono like an aging Old Hollywood starlet. She's also a descendant of the Mutchmores, one of the town's founding families. When a body is found in the pond of a nearby park, her connection to this powerful and wealthy family turns dangerous, possibly deadly. The Mutchmores are hiding something and are willing to do anything to keep their secrets buried.

Paperback, 368 pages
Published May 24, 2022
by Harper Paperbacks
4/5 stars
It was so nice to get back with August, first introduced in Dark August. While this book could be read as a stand alone, I do recommend reading Dark August first.
Picking up where Dark August left off Gus finds herself unravelling a mystery that goes back decades. With angry adults, a feisty 10 year old and an ageing blind woman. When a body is found in the local pond it sets off a journey to solve unresolved issues from the past. Oh and one can’t forget Levi, Gus’s canine sidekick.
What follows is an adventure shrouded in the past, with those wanting to keep the past silenced. While there are a number of characters it was a little daunting keeping everyone straight, as well as figuring out who can be trusted.
Poison Lilies is a story of new beginnings, secrets, closure and family.  Slow at times but still an entertaining read.
My thanks to Harper Collins CA for this print ARC in exchange for a honest review.
Posted by Margaret @ JustOneMoreChapter at 9:27 PM