The Hunted by Roz Nay 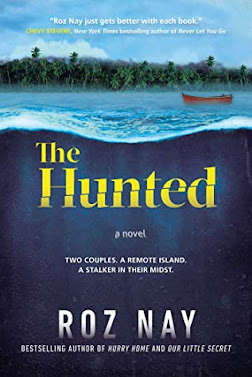 The Beach meets The Woman in Cabin 10 in this twisty new thriller about two couples who meet backpacking through Africa, but what begins as friendship quickly turns to obsession, with deadly consequences—from bestselling author Roz Nay.

Stevie Erickson is looking for a fresh start. The sudden loss of her grandmother has sent her life into a tailspin, dredging up old losses and putting a strain on her relationship with her boyfriend, Jacob. So when Jacob is offered a job as a diver for GoEco, a dive operation for ecotourists on Rafiki, a beautiful, secluded island off the coast of Tanzania, he thinks it’s just the adventure they need and Stevie reluctantly agrees to go with him.

Their trip gets off to a rough start with a nighttime scare at their first hostel. Already fragile, Stevie can’t shake the feeling that she’s being watched. Things improve when they meet seasoned backpackers Leo and Tamsin, a drop-dead gorgeous couple who instantly take a shine to Stevie and Jacob.

But on Rafiki Island, their new friendship is put to the test, as is Stevie and Jacob’s own relationship. And when innocent flirting goes too far, past truths surface, exposing a killer in their midst—a killer whose sights are set on Stevie.

A high dive into the dangers of obsession, this sinister and seductive thriller will leave you breathless.

Kindle Edition
Expected publication: July 6th 2021
by Simon & Schuster
3.5/5 stars
This is my second book by Canadian author Roz Nay and also her 3rd book.
The Hunted started with a bang that set a creepy tone beginning that sense of suspense and mystery I love in this genre.
Stevie needs a fresh start and gets way more than she bargained for.  When her boyfriend Jacob gets a job in Africa it seems like a good place to start. Told with alternating POVs between Stevie and Leo, someone they met during their travels. The travel was an adventure in itself, not the travelling I'm used to, it gave the real sense of being in another country altogether.
The Hunted was a wild ride, especially given a 'oh my goodness he's crazy' character.  I was kept on my toes and honestly thought I had things figured out but alas I was wrong. I might not have liked the majority of the characters but the story was mysterious, suspenseful with an ending that surprised me.
My thanks to Simon & Schuster CA for a digital ARC (via Netgalley)
in exchange for an honest review.
Posted by Margaret @ JustOneMoreChapter at 10:55 PM