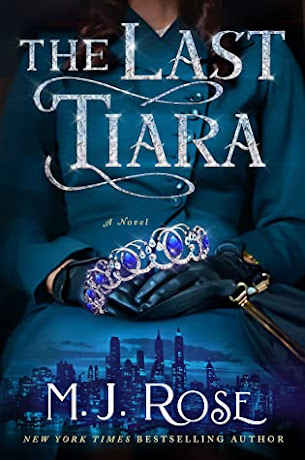 From New York Times and Wall Street Journal bestseller M.J. Rose comes a provocative and moving story of a young female architect in post-World War II Manhattan, who stumbles upon a hidden treasure and begins a journey to discovering her mother’s life during the fall of the Romanovs.

Sophia Moon had always been reticent about her life in Russia and when she dies, suspiciously, on a wintry New York evening, Isobelle despairs that her mother’s secrets have died with her. But while renovating the apartment they shared, Isobelle discovers something among her mother’s effects—a stunning silver tiara, stripped of its jewels.

Isobelle’s research into the tiara’s provenance draws her closer to her mother’s past—including the story of what became of her father back in Russia, a man she has never known. The facts elude her until she meets a young jeweller, who wants to help her but is conflicted by his loyalty to the Midas Society, a covert international organization whose mission is to return lost and stolen antiques, jewels, and artwork to their original owners.

Told in alternating points of view, the stories of the two young women unfurl as each struggles to find their way during two separate wars. In 1915, young Sofiya Petrovitch, favourite of the royal household and best friend of Grand Duchess Olga Nikolaevna, tends to wounded soldiers in a makeshift hospital within the grounds of the Winter Palace in St. Petersburg and finds the love of her life. In 1948 New York, Isobelle Moon works to break through the rampant sexism of the age as one of very few women working in a male-dominated profession and discovers far more about love and family than she ever hoped for.

In M.J. Rose’s deftly constructed narrative, the secrets of Sofiya’s early life are revealed incrementally, even as Isobelle herself works to solve the mystery of the historic Romanov tiara (which is based on an actual Romanov artifact that is, to this day, still missing)—and how it is that her mother came to possess it. The two strands play off each other in finely-tuned counterpoint, building to a series of surprising and deeply satisfying revelations.

Kindle Edition
Expected publication: February 2nd 2021
by Blue Box Press
3.5/5 stars
There seems to be a theme in the last couple of books my M.J. Rose - Cartier's Hope, Tiffany Blues and now The Last Tiara.  It's an interesting theme and rather catchy.
As with her previous books this is a dual time period story, told by a mother and her daughter.  Both era's aren't always friendly to women which played out here. Both independent, one strong as she lives during turbulent times and the other who is constantly obsessing about being good enough - which was repeated too many times.  I get being insecure, especially in the 1940's for ambitious women and understand that is an issue but it just seemed over done.
This is very much a tell book, sometime it works just fine but other times not so much.  It's obvious the author knows the era with the history being well researched, though a couple info drops disrupted the flow.  I enjoyed learning about Faberge and the historical details both in Russia and the US.  I would have loved author notes just to clarify what was fact vs fiction.
The mystery side of the story revolving around this tiara played out nicely. Lots of clues, twist and turns with a fitting conclusion.
My thanks to the publisher, Blue Box Press (via Netgalley) for an advanced e-arc in exchange for a honest review.
Posted by Margaret @ JustOneMoreChapter at 8:17 PM