Audio Review: The Answer Is…: Reflections on My Life by Alex Trebek 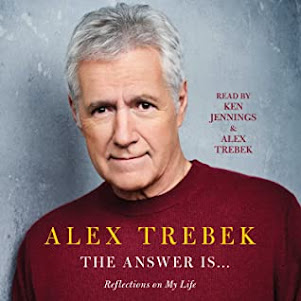 Since debuting as the host of Jeopardy! in 1984, Alex Trebek has been something like a family member to millions of television viewers, bringing entertainment and education into their homes five nights a week. Last year, he made the stunning announcement that he had been diagnosed with stage four pancreatic cancer. What followed was an incredible outpouring of love and kindness. Social media was flooded with messages of support, and the Jeopardy! studio received boxes of cards and letters offering guidance, encouragement, and prayers.

For over three decades, Trebek had resisted countless appeals to write a book about his life. Yet he was moved so much by all the goodwill, he felt compelled to finally share his story. “I want people to know a little more about the person they have been cheering on for the past year,” he writes in The Answer Is…: Reflections on My Life.

The book combines illuminating personal anecdotes with Trebek’s thoughts on a range of topics, including marriage, parenthood, education, success, spirituality, and philanthropy. Trebek also addresses the questions he gets asked most often by Jeopardy! fans, such as what prompted him to shave his signature mustache, his insights on legendary players like Ken Jennings and James Holzhauer, and his opinion of Will Ferrell’s Saturday Night Live impersonation. The book uses a novel structure inspired by Jeopardy!, with each chapter title in the form of a question, and features dozens of never-before-seen photos that candidly capture Trebek over the years.

This wise, charming, and inspiring book is further evidence why Trebek has long been considered one of the most beloved and respected figures in entertainment.
Audiobook, 4 hours 35 minutes
Alex Trebek (Author/Narrator),
Ken Jennings (Narrator)
Published July 21st 2020
by Simon & Schuster Audio
3.5/5 stars
I put the audio of this on hold at the library as soon as it was released, took about 5 months but finally got it - I guess that's a sign at how popular it is.
Like so many others who love Jeopardy I was saddened to hear of a cancer diagnosis and passing of fellow Canadian Alex Trebek.  Written by Trebek the audio is read by former contestant and friend Ken Jennings with some chapters voiced by Alex himself.
The Answer Is is a memoir of his life beginning in Sudbury, Ontario.  It was a true reflection of his insights into his thoughts, standards and where he shared some words of wisdom.  The chapters are short, as is the audio - 4 & 1/2 hours long.
I enjoyed listening to this one and actually glad I went though that route, though I imagine the print copy would included photos. Trebek had an interesting life on his way to Jeopardy, there wasn't anything earth shattering here just a nice reflection of his life, family and interests.
I think fans of all ages will enjoy this one.
My copy was obtained from the public library via Libby.
Posted by Margaret @ JustOneMoreChapter at 12:33 PM