The Coronation by Justin Newland

It is 1761. Prussia is at war with Russia and Austria. As the Russian army occupies East Prussia, King Frederick the Great and his men fight hard to win back their homeland.

In Ludwigshain, a Junker estate in East Prussia, Countess Marion von Adler celebrates an exceptional harvest. But this is soon requisitioned by Russian troops. When Marion tries to stop them, a Russian Captain strikes her. His Lieutenant, Ian Fermor, defends Marion's honour, but is stabbed for his insubordination. Abandoned by the Russians, Fermor becomes a divisive figure on the estate.

Close to death, Fermor dreams of the Adler, a numinous eagle entity, whose territory extends across the lands of Northern Europe and which is mysteriously connected to the Enlightenment. What happens next will change the course of human history...


"The author is an excellent storyteller." â€“ British Fantasy Society

Justin Newland was born in Essex, England, three days before the end of 1953.

His love of literature began with swashbuckling sea stories, pirates and tales of adventure. Undeterred by the award of a Doctorate in Mathematics from Imperial College, London, he worked in I.T. and later ran a hotel.

His taste in literature is eclectic: from literary fiction and fantasy, to science fiction, with a special mention for the magical realists and the existentialists. Along the way, he was wooed by the muses of history, both ancient and modern, and then got happily lost in the labyrinths of mythology, religion and philosophy. Justin writes secret histories in which real events and historical personages are guided and motivated by numinous and supernatural forces.

His debut novel, The Genes of Isis, is a tale of love, destruction, and ephemeral power set under the skies of Ancient Egypt, and which tells the secret history of the human race, Homo Sapiens Sapiens.

His second is The Old Dragonâ€™s Head, a historical fantasy and supernatural thriller set during the Ming Dynasty and played out in the shadows the Great Wall of China. It explores the secret history of the influences that shaped the beginnings of modern times.

Set during the Enlightenment, his third novel, The Coronation reveals the secret history of perhaps the single most important event of the modern world â€“ The Industrial Revolution.

He lives with his partner in plain sight of the Mendip Hills in Somerset, England.

Monday, December 28
Passages to the Past 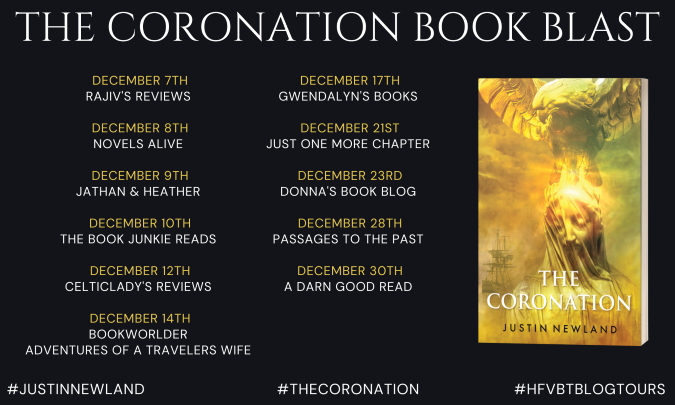