Review: A Murder in Time (Kendra Donovan #1) by Julie McElwain 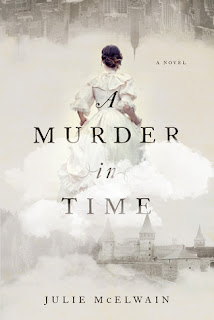 Beautiful and brilliant, Kendra Donovan is a rising star at the FBI. Yet her path to professional success hits a speed bump during a disastrous raid where half her team is murdered, a mole in the FBI is uncovered and she herself is severely wounded. As soon as she recovers, she goes rogue and travels to England to assassinate the man responsible for the deaths of her teammates.
While fleeing from an unexpected assassin herself, Kendra escapes into a stairwell that promises sanctuary but when she stumbles out again, she is in the same place - Aldrich Castle - but in a different time: 1815, to be exact.

Mistaken for a lady's maid hired to help with weekend guests, Kendra is forced to quickly adapt to the time period until she can figure out how she got there; and, more importantly, how to get back home. However, after the body of a young girl is found on the extensive grounds of the county estate, she starts to feel there's some purpose to her bizarre circumstances. Stripped of her twenty-first century tools, Kendra must use her wits alone in order to unmask a cunning madman.
Kindle Edition, 513 pages
Published April 15th 2016
by Pegasus
3/5 stars
I can't believe its been 4 years since A Murder in Time has been released.  I remember when so many of my blogger friends recommended this one and I jumped to grab at an ARC when it was offered.  Unfortunately life got in the way and its only been recently that I did a buddy read with Laurie aka The Baking Bookworm. Here is the thing with Laurie and I, there are some books that we both love, some I love and she doesn't and visa versa and ya know what? That's okay, because wouldn't life be boring if we all loved the same thing.  Follow the link above for her review.
A Murder in Time started out great, a feisty Kendra was an instant like for me.  She took no guff, was confident and as her past was revealed I really felt for her. I enjoyed the writing, it was engaging and had me wanting to read more.
Things changed though once she is hurtled back in time to 1815. That in itself was done nicely and actually felt authentic. As the story progressed the tone did also. I get that she struggled to adapt and even accept what happened.  Dawning her FBI profiler hat didn't help when the actions and language were too modern for the times. I was tired of hearing unsub over and over again.
The mystery was interesting, a wide case of characters to keep my eyes on and with no modern forensic methods made this case very interesting.  Now that it's been a while since A Murder of Time has been released I know there is a sequel or two out there.
Posted by Margaret @ JustOneMoreChapter at 5:16 PM