Review: The Second Home: A Novel by Christina Clancy 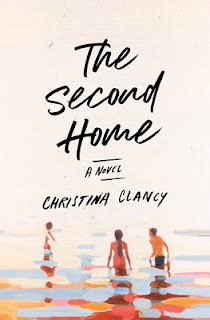 After a disastrous summer spent at her family summer home on Cape Cod, seventeen-year-old Ann Gordon was left with a secret that changed her life forever, and created a rift between her sister, Poppy, and their adopted brother, Michael.

Now, fifteen years later, her parents have died, leaving Ann and Poppy to decide the fate of the Wellfleet home that's been in the Gordon family for generations. For Ann, the once-beloved house is tainted with bad memories. Poppy loves the old saltbox, but after years spent chasing waves around

the world, she isn't sure she knows how to stay in one place.

Just when the sisters decide to sell, Michael re-enters their lives with a legitimate claim to the house. But more than that, he wants to set the record straight about that long ago summer. Reunited after years apart, these very different siblings must decide if they can continue to be a family—and the house just might be the glue that holds them together.

Told through the shifting perspectives of Ann, Poppy, and Michael, this assured and affecting debut captures the ache of nostalgia for summers past and the powerful draw of the places we return to again and again. It is about second homes, second families, and second chances. Tender and compassionate, incisive and heartbreaking, The Second Home is the story of a family you'll quickly fall in love with, and won't soon forget.

Kindle Edition, 340 pages
Published June 2nd 2020
by St. Martin's Press
4/5 stars
Confession time.  While the fine folks at St. Martin's press gifted me with the Kindle file for this book I just could not concentrate on reading this book - it was me not the book (actually the time we are living if truth be told).  So I used one of my Audible credits and grabbed the audio book, it didn't take long before I was totally immersed.
The Second Home is told from a few different point of views.  Mostly Ann's but Poppy and Michael's also, between 1999 and current day.  A lot of the story takes place in the Wellfleet area which had me itching for a summer by the water. From the rustic cottage, surfing and just the relaxing way of life this book was atmospheric.
This is the author's debut and while there were a few things that didn't fly with me I still enjoyed the 12 plus hours spent with this family.
One of the benefits of the audio was a nice interview with the author concluding the listen.  It was great hearing Christina Clancy talk about her inspiration and thoughts.  Thank you.
Posted by Margaret @ JustOneMoreChapter at 10:06 AM