Review: The Paper Girl of Paris by Jordyn Taylor 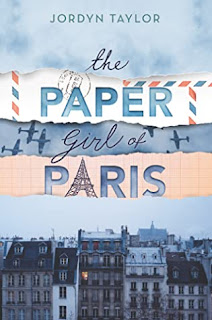 Now:
Sixteen-year-old Alice is spending the summer in Paris, but she isn’t there for pastries and walks along the Seine. When her grandmother passed away two months ago, she left Alice an apartment in France that no one knew existed. An apartment that has been locked for more than seventy years.
Alice is determined to find out why the apartment was abandoned and why her grandmother never once mentioned the family she left behind when she moved to America after World War II. With the help of Paul, a charming Parisian student, she sets out to uncover the truth. However, the more time she spends digging through the mysteries of the past, the more she realizes there are secrets in the present that her family is still refusing to talk about.

Then:
Sixteen-year-old Adalyn doesn’t recognize Paris anymore. Everywhere she looks, there are Nazis, and every day brings a new horror of life under the Occupation. When she meets Luc, the dashing and enigmatic leader of a resistance group, Adalyn feels she finally has a chance to fight back. But keeping up the appearance of being a much-admired socialite while working to undermine the Nazis is more complicated than she could have imagined. As the war goes on, Adalyn finds herself having to make more and more compromises—to her safety, to her reputation, and to her relationships with the people she loves the most.
Hardcover, 368 pages
Published May 26th 2020
by HarperTeen
4/5 stars
This book was an impulse purchase for me.  There is just something about historical fiction for YA that grabs my attention.  This is also the author's debut which just checked another box on my attention grabbing list. Oh and that cover! Look at it...need I say more?
A summer in Paris, oh how lovely that would be, especially when one is 16 years old.  The author really grabbed the essence of present day Paris, with its cafes, walks and sites just bumped it up on my bucket list. The mystery surrounding the Paris apartment has always fascinated me, this book is another take on what could have happened.  Though it doesn't really center on the apartment but rather on the family that lived there.  The treasures inside mostly revolved around a diary and a few pictures that lead Alice on a search for understanding. I liked Alice, she was a conflicted teen with her own family issues. That part of the story was a little disjointed for me, but I get that direction of the story.
The past story begins as the Germans invade and take control of Paris.  Again I was treated to visuals and aromas of the time.  Adalyn had to do a lot of growing up, her resistance to the changes affected her relationship with those she held dear and through her courage she longed to make a difference.  I would have loved some author notes at the end, just to know which (if any) events and characters were based on historical facts.
The Paper Girl of Paris is a coming of age story with YA as the targeted audience, but this adult enjoyed the ride.  A solid debut for Jordyn Taylor, I'll be on the lookout for you next book coming out summer of 2021.
This book was from my personal library and part of my '2020 reading off my shelf' challenge.
Posted by Margaret @ JustOneMoreChapter at 9:40 PM