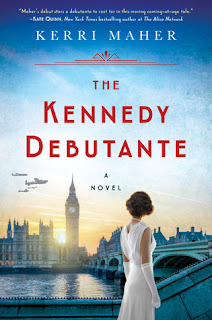 A captivating novel following the exploits of Kathleen "Kick" Kennedy, the forgotten and rebellious daughter of one of America's greatest political dynasties.

London, 1938. The effervescent "It girl" of London society since her father was named the ambassador, Kathleen "Kick" Kennedy moves in rarified circles, rubbing satin-covered elbows with some of the 20th century's most powerful figures. Eager to escape the watchful eye of her strict mother, Rose, the antics of her older brothers, Jack and Joe, and the erratic behavior of her sister Rosemary, Kick is ready to strike out on her own and is soon swept off her feet by Billy Hartington, the future Duke of Devonshire.

But their love is forbidden, as Kick's devout Catholic family and Billy's staunchly Protestant one would never approve their match. When war breaks like a tidal wave across her world, Billy is ripped from her arms as the Kennedys are forced to return to the States. Kick gets work as a journalist and joins the Red Cross to get back to England, where she will have to decide where her true loyalties lie--with family or with love . . .

I don’t know too much about the Kennedy family so I jumped at the chance to read this book about Kathleen ‘Kick’ Kennedy, and again to be honest I didn't know that there were even Kennedy sisters.

Beginning before the onset of WW2 I was introduced to Kick’s years in England, her mindset as she was trying to discover herself at the same time as being influenced from her family. Influenced seems a mild word given she is one of Joe and Rose Kennedy’s daughters and they had high standards for their children whether they liked it or not.

The author portrayed a brave young woman who searched, found purpose and love in a country not her own. Her struggles, heartache, and growth were depicted here as was her relationship with the family.  By the end, I was googling to learn more about her and other members of the family.

I struggled at the beginning but it ended up being an enjoyable read.  This is my first time reading Kerri Maher and will be on the lookout for more of her books.


My thanks to Berkley (via Netgalley) for an e-arc in exchange for an honest review.
Posted by Margaret @ JustOneMoreChapter at 4:25 PM