Review: The Borgia Confessions: A Novel by Alyssa Palombo 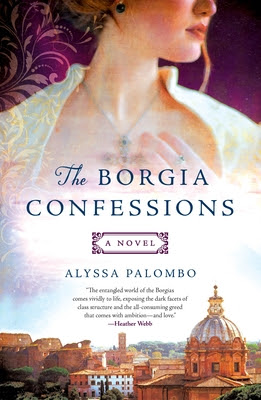 'Under Palombo’s skillful hand, the entangled world of the Borgias comes vividly to life, exposing the dark facets of class structure and the all-consuming greed that comes with ambition--and love." - Heather Webb, internationally bestselling author of Last Christmas in Paris and Meet Me in Monaco

During the sweltering Roman summer of 1492, Rodrigo Borgia has risen to power as pope. Rodrigo’s eldest son Cesare, forced to follow his father into the church and newly made the Archbishop of Valencia, chafes at his ecclesiastical role and fumes with jealousy and resentment at the way that his foolish brother has been chosen for the military greatness he desired.

Maddalena Moretti comes from the countryside, where she has seen how the whims of powerful men wreak havoc on the lives of ordinary people. But now, employed as a servant in the Vatican Palace, she cannot help but be entranced by Cesare Borgia’s handsome face and manner and finds her faith and conviction crumbling in her want of him.

As war rages and shifting alliances challenge the pope’s authority, Maddalena and Cesare's lives grow inexplicably entwined. Maddalena becomes a keeper of dangerous Borgia secrets and must decide if she is willing to be a pawn in the power games of the man she loves. And as jealousy and betrayal threaten to tear apart the Borgia family from within, Cesare is forced to reckon with his seemingly limitless ambition.

Alyssa Palombo's captivating new novel, The Borgia Confessions, is a story of passion, politics, and class, set against the rise and fall of one of Italy's most infamous families--the Borgias.

Cesare Borgia was a teen with dreams of military life but when your father is Rodrigo Borgia, the Pope, well your life isn't your own.  When the Pope tells you what to do there is no arguing.  Such is the life of Cesare, bowing to his father (literally).  It was a nice change to have a male POV, he might not be all that likable but getting a sense of his turmoil and desires made his story authentic.  It wasn't a pretty story - these are the Borgia's after all, but seeing it from his perspective didn't justify his behavior but one could understand it better.  Actually, that isn't correct, who can really understand the things they did.

The other POV was that of Maddalena, she is a fictional character, maid to Cesare's sister Lucrezia. With desires of her own, secrets to keep and guilt to overcome she is caught up in the Borgia net and gets more than she bargained for.

This is only my second time reading Alyssa Palombo and I find her writing style gripping.  I am placed in the halls of The Vatican or in the dark alleys.  She brings to life a time of unrest with her research shining through along with her passion for the time period.

If you haven't read Alyssa Palombo I highly recommend this book along with her previous release The Spellbook of Katrina Van Tassel: A Story of Sleepy Hollow.


My thanks to St. Martin's Griffin (via Netgalley) for an advanced digital copy in exchange for an honest review.
Posted by Margaret @ JustOneMoreChapter at 9:57 PM