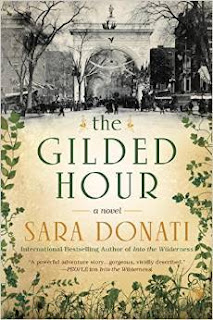 The year is 1883, and in New York City, it’s a time of dizzying splendor, crushing poverty, and tremendous change. With the gravity-defying Brooklyn Bridge nearly complete and New York in the grips of anti-vice crusader Anthony Comstock, Anna Savard and her cousin Sophie—both graduates of the Woman’s Medical School—treat the city’s most vulnerable, even if doing so may put everything they’ve strived for in jeopardy.

Anna's work has placed her in the path of four children who have lost everything, just as she herself once had. Faced with their helplessness, Anna must make an unexpected choice between holding on to the pain of her past and letting love into her life.

For Sophie, an obstetrician and the orphaned daughter of free people of color, helping a desperate young mother forces her to grapple with the oath she took as a doctor—and thrusts her and Anna into the orbit of Anthony Comstock, a dangerous man who considers himself the enemy of everything indecent and of anyone who dares to defy him.

Sara Donati wrote the Into The Wilderness Series and I loved it! Six big books to get lost in, that follow the lives of Nathaniel and Elizabeth Bonner. The Gilded Hour is a stand-alone but it continues many, many, many years later with descendants of the Bonner's.

One of first things I love is the blurb, there is no hint possibility of spoilers but just enough to whete the senses.

Originally I had planned on going the audio route but read it instead. I'm glad for that decision, not just for the number of characters but the many layers to this story. Sara Donati is a wonderful storyteller, her words put me right in New York City in the year 1883. Anthony Comstock is a real historical figure (as are a few others) and one unknown to me and I love reading about the past, learning the history and being served a great story.  As I said many layers here and without revealing too much The Gilded Hour is a story of mystery, suspense, perseverance, heartache and love.  It’s about relationships and a city that can’t take care of their own and those that step in to help.

The character development was spot on, getting to know not just Anna but other key players - seeing what made them tick and the unique personalities. A woman doctor was a rare thing and not easily accepted by some. Times are changing but not quickly enough for some and too quickly for others.

I had been hesitant to pick this up because of its size - 730 pages, but they flew by. With the sequel, Where the Light Enters, set to release September 10th, 2019 I knew it was time.  This book ended with some unresolved issues making a sequel necessary and I am truly grateful my wait won’t be as long as those that read this at its release.

Sara Donati is an author I highly recommend, especially to those that love an epic-sized series that takes the reader to different places.


This book is part of my 2019 Reading off my shelf challenge. 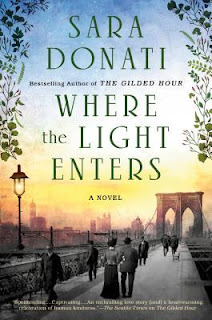 Posted by Margaret @ JustOneMoreChapter at 8:13 AM