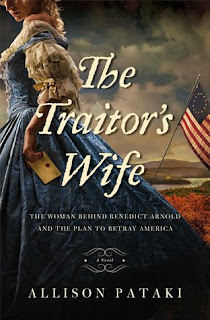 A riveting historical novel about Peggy Shippen Arnold, the cunning wife of Benedict Arnold and mastermind behind America’s most infamous act of treason . . .

Everyone knows Benedict Arnold—the Revolutionary War general who betrayed America and fled to the British—as history’s most notorious turncoat. Many know Arnold’s co-conspirator, Major John André, who was apprehended with Arnold’s documents in his boots and hanged at the orders of General George Washington. But few know of the integral third character in the plot: a charming young woman who not only contributed to the betrayal but orchestrated it.

Socialite Peggy Shippen is half Benedict Arnold’s age when she seduces the war hero during his stint as military commander of Philadelphia. Blinded by his young bride’s beauty and wit, Arnold does not realize that she harbors a secret: loyalty to the British. Nor does he know that she hides a past romance with the handsome British spy John André. Peggy watches as her husband, crippled from battle wounds and in debt from years of service to the colonies, grows ever more disillusioned with his hero, Washington, and the American cause. Together with her former love and her disaffected husband, Peggy hatches the plot to deliver West Point to the British and, in exchange, win fame and fortune for herself and Arnold.

Told from the perspective of Peggy’s maid, whose faith in the new nation inspires her to intervene in her mistress’s affairs even when it could cost her everything, The Traitor’s Wife brings these infamous figures to life, illuminating the sordid details and the love triangle that nearly destroyed the American fight for freedom.


I have had this book on my TBR pile since it was released back in 2014. Not knowing anything about Benedict Arnold I wanted to know his past and what he did to earn him the traitor title.

I have read the author’s subsequent books, The Accidentally Empress and Sisi both of which I enjoyed as well and her nonfiction Beauty in the Broken Places,  as she talks candidly about her husband's stroke and the next year of their lives.

It’s 1778 when The Traitor’s Wife begins with a smattering of 1780 thrown in, told from the POV of Peggy Shippen’s maid/servant. If the author’s intent was to portray Peggy as a spoiled, self indulgent immature girl (she was only 18 years old) then she did that spot on. I didn’t like her at all, her obsession with herself got on my nerves, as did the endless clothing discussions. The first 100 plus pages were devoted to 2 balls, making me glad I went the audio route - it might have been a dnf at that point. I know I am going against the flow with my feeling here but wouldn’t life be boring if we all shared the same thoughts.

While I did learn from this book, intrigued in the historical aspects and how it played out I felt it could have been a little shorter.