Excerpt: The Secret Life of Mrs. London by Rebecca Rosenberg

Today I am happy to share an excerpt from The Secret Life of Mrs. London by Rebecca Rosenberg (clicking on title will take you to my review) 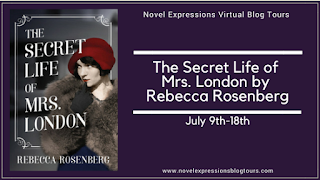 For her I accomplished Odysseys, scaled mountains, crossed deserts; for her I led the hunt and was forward in battle; and for her and to her I sang my songs of the things I had done. All ecstasies of life and rhapsodies of delight have been mine because of her. And here, at the end, I can say that I have known no sweeter, deeper madness of being than to drown in the fragrant glory and forgetfulness of her hair.

Nothing breathes vigor into a marriage like a boxing match. And it helps to have a stupefied audience to witness the fight. If I can get Jack boxing this morning, with his drinking buddies cheering him on, he’ll be revved up for a good writing session followed by a “grand lolly” that will linger in our loins for days. So I pull on muslin bloomers and leather boxing boots from my wardrobe, twist my hair into a topknot, daub on lavender oil for luck. Our fox terrier raises his head from my bed, ears perked. I stroke his chest and lift him down, his little heart beating in my palm. “Come on, Possum, he can’t say no to you.”

Slinging boy-sized boxing gloves over my neck, I cross the hallway to Jack’s own sleeping porch, where he sleeps it off after our houseguests plied him with martinis at the Glen Ellen saloon until the wee hours. Possum romps at my heels. Jack still reeks of gin, and his snoring drowns out the jeering blue jays.

Jack’s not moving. So I lift Possum up and let him lick Jack’s face. “Time for our match.”

“Charmian, no. It can’t be morning.” He pulls a feather pillow over his head, and Possum nuzzles underneath.

“Oh, but it is.” I throw the pillow to the floor, and Possum laps at his cheeks.

“And a deal is a deal.” Jack groans and lifts up onto one elbow, holding the dog off with his other hand. “I can’t do this after last night.”

“You can. I know you can.” I take Possum in my arms. Jack’s valet, Nakata, enters with a cup of coffee balanced on his upturned palm, dressed as usual in a haori jacket and skirted trousers. “Kishi kaisei, Mr. Jack.”

Jack sits up and takes the coffee. “My head’s too fuzzy for Japanese this morning.”

Nakata smiles with teeth straight as piano keys. “Wake from death and return to life.”

Jack grimaces. “That supposed to make me feel better?” Nakata bows and leaves, Possum following him for breakfast. The Socialists criticize Jack for employing servants, but Nakata is essential to his well-being. He starts Jack’s day with platitudes and strong coffee, grants his wildest wishes, manages our household staff so we can focus on writing, and, in the evening, prepares Jack’s cot with philosophy books and farming journals, small and large writing pads, sharpened pencils, and a thermos of martinis (equal splashes of vermouth and olive juice). Together, Nakata and I handle Jack’s needs, and I pray he will never leave us.

I lace on Jack’s boxing boots while he slurps his coffee, his ankles swollen. Drinking always kicks up his gout. “I was kidding about the boxing,” he says. “A joke for the Crowd . . .” His nickname for the Bohemian-Socialist-literary folks who worship at his feet. Come to think of it, that’s exactly where I happen to be at the moment.

“Oh no. You’re not getting away with it this time.” I knot his laces tighter. “‘Bring me the boxing gloves if I’m not up by eight,’ you said.

‘Best thing in the world for a hangover,’ you said. ‘We’ll do the drop-and-grind drill,’ you said.” Jack smirks. “I love it when you talk dirty.”

“Come on, champ. Let’s give it a go. Our audience awaits.” I hoist his arm over my shoulders, staggering under the weight he’s gained of late.

He limps to the back door.

Nakata and some of the staff have gathered to watch on the back stoop between our separate sleeping porches, Jack’s remedy for my chronic insomnia and his late hours.

In an apron and calico dress, Jack’s sister, Eliza, washes the windowpanes, doughy underarm flesh swinging with each swipe of her dish towel. “Boxing is no good for Jack.” She clucks her tongue at me. “Just brings out the poison in his system all over again.”

“Better out than in,” I answer. Lawrence Godfrey-Smith, the Australian concert pianist turned eucalyptus broker, and George Sterling, poet king of the Bohemians, follow us out to the porch with coffee mugs.

“What’s all the ballyhoo?” Lawrence nudges me in the overfamiliar way he’s adopted since that time on the beach in Australia . . .

I step down to the garden. “Don’t you remember Jack’s promise when you stumbled in last night? He wanted to box this morning to get his blood flowing for writing.”

“Who’s he going to wallop?”

I thrust up my gloved hand. “Me, of course.” Lawrence turns to Sterling. “Do all American couples fight?”

It’s nine o’clock already, and the sun just cleared the top of the redwoods, illuminating the garden like an arena. Our boots crush the creeping thyme, melding with the herbaceous smell of ripening chardonnay grapes.

Jack bounces forward on his left foot, then weaves back, shifting his weight to the right, then back again. Red shorts hug his waist and skim his well-built thighs. He looks fitter than he is, from a past regimen of boxing, swimming, horseback riding. It’s not fair how men look better than us as they age. Not fair at all.

“The legs of a Roman goddess.” Sterling whistles.

“Mind your p’s and q’s, Greek,” Jack says. “Those are my wife’s gams you’re looking at.” He throws the first punch, which lands square to my glove.

“I’m talking about your legs, Wolf.” Sterling combs long fingernails through his goatee, making my skin crawl. The disheveled poet could use a comb and nail scissors . . . and a bath, come to think of it.

Jack camps a pose and spins his white satin boxing sash around like Jack Johnson at the world championship.

After I take a playful poke at his ribs to get his attention, suddenly he’s jumping around me like Possum dancing for a scrap of meat.

For a while, Jack and I practice our drill, throwing rhythmic punches, gaining confidence and speed. We must look hilarious with Jack so much taller and broader and me, his “small woman,” holding my own.

“Hey, Wolf,” Lawrence says. “If you win, I’ll take a hundred dollars off your eucalyptus starts.”

Jack thumbs his nose in jest, though I know it eats at him to owe Lawrence for the seedlings, with no way to pay yet. Our Aussie friend convinced Jack eucalyptus would make him a fortune, but the seedlings have only added to our growing debt.

A mighty punch whizzes past me. Jack huffs and rolls his eyes. “You’ve got the advantage today, Mate-Woman. I have the willies.”

“Excuses, excuses.” I make a right jab at his chest, and he takes it, his shoulder swinging back. Abdomen, chest, or shoulders are fair game, but anything below Jack’s belt isn’t allowed— his kidneys and liver have taken all the abuse they can handle.

Eliza shoos the staff inside. “Don’t you people have work to do this morning? The ranch doesn’t run itself.” Her nostrils flare at me. “Though some folks seem to think so.”

Nine years married to her brother, and Eliza still sees me as a nuisance to endure.

“Stay in the match or I’ll knock your block off.” Jack takes a swipe. We go at it for another quarter hour. Jack’s chest swells out, his breath labors. I prance and punch to give him a fight, but not too much to tire him out or bruise his ego.

Lawrence watches my antics with palpable pleasure, which Jack pretends not to notice. Now for the tricky part, how to end this thing. In an effort to go down fighting, I swing in the air, but my glove catches his jaw. I lose my footing and fall on the flagstones, hitting my tailbone with a searing pain. Lawrence runs and lifts me up. “Are you all right?” Jack asks, blood trickling from his mouth onto his chin.

“You won. You won, Wolf.” Sterling claps long hands together in mockery. “You beat the stuffing out of the little lady.”

“Did I hurt you, Lady-Boy?” Jack holds his jaw, jiggles it side to side.

Breaking free of Lawrence’s grasp, I run to wipe the blood from Jack’s chin with my shirttail. “Now if you’ll excuse us, gentlemen, we have a novel to write.” Jack’s golden rule: write a thousand words a day. And my job is to keep him to it.

I take Jack’s hand and pull him up the steps, feeling Lawrence’s eyes on my backside, tingling despite my good intentions. Damn eucalyptus. Damn blue-eyed, blond Aussies.

“I feel like a new man.” Jack pats my rear and makes me jump. “You know just what I need, don’t you, Mate?”

“What you need is a shower.” I hold open the screen door. “After we finish the story, we’ll figure out what else you need.”
Posted by Mrs Cook at 12:30 AM