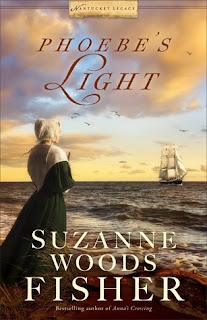 Phoebe Starbuck has always adjusted her sails and rudder to the whims of her father. Now, for the first time, she's doing what she wants to do: marrying Captain Phineas Foulger and sailing far away from Nantucket. As she leaves on her grand adventure, her father gives her two gifts, both of which Phoebe sees little need for. The first is an old sheepskin journal from Great Mary, her highly revered great-grandmother. The other is a "minder" on the whaling ship in the form of cooper Matthew Mitchell, a man whom she loathes.

Soon Phoebe discovers that life at sea is no easier than life on land. Lonely, seasick, and disillusioned, she turns the pages of Great Mary's journal and finds herself drawn into the life of this noble woman. To Phoebe's shock, her great-grandmother has left a secret behind that carries repercussions for everyone aboard the ship, especially her husband the captain and her shadow the cooper. This story within a story catapults Phoebe into seeing her life in an entirely new way--just in time.

In this brand-new series, bestselling author Suzanne Woods Fisher brings her signature twists and turns to bear on a fascinating new faith community: the Quakers of colonial-era Nantucket Island.

This is the first book in Suzanne Woods Fisher’s new Nantucket Legacy Series. This author had me with her Amish Beginnings Series, it’s rich detail, flawed and realistic characters plus an interesting story line kept my attention for all 3 books. Hence my eagerness to begin this one.

Again I was not disappointed. Phoebe Starbucks is a likable character living in a time when women were at the mercy of men around her. She takes control of her life (trying to help her father), and is lead on an adventure over land and sea.

It’s Phoebe’s ancestor, Great Mary's diary that rounds out the story nicely. With rich details of living in a time where surviving was what one woke up to every day. I love reading about the early settlers, those working the land with its many obstacles.

Phoebe’s Light is a story of forgiveness, survival and finding one’s Light. A great start to new series with book 2, Minding the Light hitting the bookshelves a few weeks ago (how did I miss that!)


Thank you to the publisher via Netgalley for an advance copy, due to personal issues I went the audio route on this on and it was as great!
Posted by Margaret @ JustOneMoreChapter at 8:44 AM