Review: The Secret Life of Mrs. London by Rebecca Rosenberg 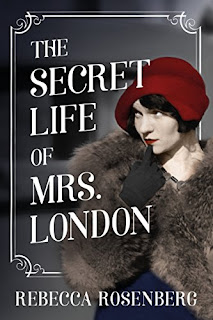 As America teeters on the brink of world war, Charmian and her husband, famed novelist Jack London, wrestle with genius and desire, politics and marital competitiveness. Charmian longs to be viewed as an equal partner who put her own career on hold to support her husband, but Jack doesn’t see it that way…until Charmian is pulled from the audience during a magic show by escape artist Harry Houdini, a man enmeshed in his own complicated marriage. Suddenly, charmed by the attention Houdini pays her and entranced by his sexual magnetism, Charmian’s eyes open to a world of possibilities that could be her escape.

As Charmian grapples with her urge to explore the forbidden, Jack’s increasingly reckless behavior threatens her dedication. Now torn between two of history’s most mysterious and charismatic figures, she must find the courage to forge her own path, even as she fears the loss of everything she holds dear.


"I would rather be ashes than dust! I
would rather that my spark should burn
out in a brilliant blaze than it should be
stifled by dry-rot. I would rather be a
superb meteor, every atom of me in
magnificent glow, than a sleepy and
permanent planet.  The function of man is
to live, not to exist.  I shall not waste my
days trying to prolong them.  I shall use
my time."
-Jack London, Jack London's Tales of Adventure


I finished this book about a week ago and still thinking about it and pondering my review. I knew nothing about the life of Jack London and I’ve never even read any of his books. But I do have a fascination with reading books about the partners/spouses of well-known historical figures. I feel they give a clear and different viewpoint of their lives. With The Secret life of Mrs London I know it is fictionalized but still makes for entertaining and educational reading.

This is one of those books where I struggle with what to say.  To say it bluntly at times I really didn’t like some of the characters especially Jack and his wife, Charmian. Charmain, the second Mrs. London (he divorced first wife for her) and also an author though not as widely known as Jack. She did everything for him from being his typist, editor and so much more.  This book is written in first person, the reader is able to get inside of Charmian‘s head to get a vivid picture of her struggles. She lives in a time where free love and woman’s right were unheard of - things she was passionate about. She wants more out of life but Jack thinks only of himself and schemes to make money between books.

The Secret Life of Mrs. London is a well written book and true to the times it portrayed. The role of Harry Houdini here was very interesting and their connection together added much to Charmian’s character.  I liked how Charmian's story did not end when Jack's did.  My interest in reading not just some of Jack London's books have peeked as those by Charmian also.


Thank you to the author for an advanced copy of this book (in exchange for an honest review).  This book releases January 30th and available for preorder now.
Posted by Margaret @ JustOneMoreChapter at 12:28 PM