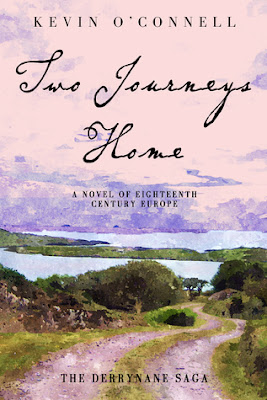 It’s 1767. As the eagerly anticipated sequel to Beyond Derrynane begins, Eileen O’Connell avails herself of a fortuitous opportunity to travel back to Ireland. In Two Journeys Home, the O’Connells encounter old faces and new—and their lives change forever.

Her vivacious personality matched only by her arresting physical presence, Eileen returns to Derrynane this time not as a teen aged widow but as one of the most recognised figures at the Habsburg court. Before returning to Vienna she experiences a whirlwind romance, leading to a tumult of betrayal and conflict with the O’Connell clan.

Abigail lives not in the shadow of her sister but instead becomes the principal lady-in-waiting to Empress Maria Theresa.

Hugh O’Connell leaves behind waning adolescence and a fleeting attraction to the youngest archduchess when he begins a military career in the Irish Brigade under Louis XV. But more royal entanglement awaits him in France…

Author Kevin O’Connell again deftly weaves threads of historical fact and fancy to create a colourful tapestry affording unique insights into the courts of eighteenth-century Catholic Europe and Protestant Ascendancy–ruled Ireland. Watch as the saga continues to unfold amongst the O’Connell’s, their friends and enemies, at home and abroad.

Having served at the court of the Empress Maria Theresa for almost six years, Eileen O’Connell has returned to her family’s home at Derrynane in County Kerry, Ireland for a brief visit. Though she had last departed the O’Connells’ sanctuary as a teenage widow, she returns as one of the most recognised figures at the glittering Habsburg court. During the course of her stay, she has journeyed with her twin sister, Mary, her physician husband and children, to the Baldwins’ home in County Cork.  The sisters have not been close, their differences highlighted by that Eileen is very tall, with a mane of coal-black hair, whilst Mary is of moderate height, blond and fair:

Having seen the children upstairs, Mary joined her sister in the smaller
family parlour for brandy. Eileen had already poured their drinks into two
intricately cut Irish crystal glasses and toasted her twin’s health, even as Mary was
sitting down. Both drank deeply, their cheeks immediately flushing.

Relaxed, Eileen planned on chatting informally, very much hoping to
continue their previously begun discussion about their very different
lives; she was just beginning to tell Mary about using their own not
always easy relationship growing up as a teaching device with her
archduchesses: “. . . and ’twas then that I said to Antoine—you will recall
that she is the littler one—that . . .”

“Eileen,” Mary interrupted sharply, “because you have mentioned
this, I have desired to discuss with you . . . I know not how I might best
perhaps phrase it . . . the direction of your life, perhaps?”

Surprised at her sister’s assertiveness, though instantly intrigued by
the topic, Eileen sat back, cradling her snifter in her hands, inhaling the
fine French brandy’s rich aroma, saying nothing as Mary continued, her
tone suddenly chill, sharp even.

“Is not Abigail well wed? Does she not occupy a position of great
honour and prominence at the court?” she queried; somewhat archly, Eileen
thought, though she remained silent, reflecting even as her sister was still
speaking.

Before Eileen could respond, Mary continued. “In contrast to our
dear sister’s exalted position, do you not in fact remain a servant, in effect
a nursemaid even to these little princesses . . . or duchesses is it, rather? I
mean you wait on them, do you not?”

“Archduchesses,” Eileen corrected sharply, reflexively defensive.
“Expressed correctly, they are each Her Imperial Highness, an archduchess of
Austria and Lorraine,” she said loftily, firmly adding, “and, indeed, I most
definitely do not wait upon anyone; whether I dine with the
archduchesses, with others . . . or alone, it is I who am waited upon,” she
purred.

“Oh . . . yes . . . very well, I stand corrected then,” Mary managed,
charging on, “but this does not alter your position, does it? You are still a
servant, are you not?” she said again, not pausing for any reply. “What I
am attempting to say, Eileen, is,” she sighed, with seeming exasperation,
“when might it be that you will aspire to a good marriage and a position
worthy of your talents . . . indeed, one which will, as does Abby’s, do
honour to our family, to your heritage?”

Eileen, as she rarely ever did, sat speechless, her lips parted, her
cheeks flaming, as Mary went on. “Indeed, is not my own position—well
wed to a prominent physician, mistress of his home, mother of his
children—is it not far, far superior to your own?” she asked, then took
another deep draught of her brandy.

“Sister,” Eileen began softly, “I am not certain you fully understand
my role within the Imperial household. Yes, I have cared for both these
girls, now becoming young women, since they were wee little ones. I
have been their teacher and companion, riding mistress, friend . . .
indeed, ’tis quite fair to say that I am perhaps closer to them than is their
own mother, Her Imperial Majesty.”

Deciding against mentioning that when they were alone, Antoine
now regularly addressed her as “Mama,” as Mary sighed audibly, Eileen
tacked deftly, her tone even. “What you must be aware of is that both
these young girls shall eventually, by virtue of their marriages, ascend
thrones of Europe—one of them perhaps that of France, even. You
must also appreciate, sister, that ’tis I, amongst others—a priest, several
nobles, diplomats—who have spent these years preparing them for these
positions and all that they will entail.”

Eileen should have left the topic at that point; instead, her ego getting
the best of her, she tacked yet again, this time less adroitly. “To be fair—
and though I admit the importance of any of this is perhaps insignificant
to you—you must understand I have, by the grace and favour of the
empress of course, three apartments”—the back of her hand facing her
sister, she held up her right pinkie, fourth and middle fingers for
emphasis—“in three palaces, I have servants” —she exaggerated—“by
virtue of my position, I receive deferential curtseys and bows from my
inferiors—of whom there are many, I view operas and concerts from the
same seats as are occupied by the Imperial family, Bull is stabled with the
horses belonging to the empress and their Imperial highnesses, I dine and
dance with . . . ” Seeing Mary’s eyes roll, Eileen’s voice trailed off, and
she then cleared her throat. “So, you see, sister, ’tis far from being a mere
servant that I am . . . I believe you would agree, were you to come to
Vienna and . . .”

“As I shall never do so, nor would I particularly care to do so . . . I . . .
I shall accept your word as to all that of which you speak,” Mary said, her
now-impatient tone accompanied by a flat gesture of her free hand.
“Though I nevertheless do again strongly urge you, Eileen, to consider
your future . . . After all, you are aging rapidly now, my dear, and a widow
you remain. People will come to believe that . . .” She waved her left
hand dismissively, then bending, she poured more brandy for them, as
Eileen pointedly changed the topic of the conversation.

After retiring, Eileen sat up in her bed in the flickering light of a
single candle. Widow, nursemaid, servant, husband, children . . . children,
husband—the words and their meanings spun in her mind; reflecting, she
thought, though she is lacking in any number of ways, Mary is not a stupid woman.
Eileen reflected further after she had blown out the candle, settling back
on her pillows, lying in the silent dark, recalling now her mother’s recent
counsel about considering marriage and children, as well, Perhaps I should 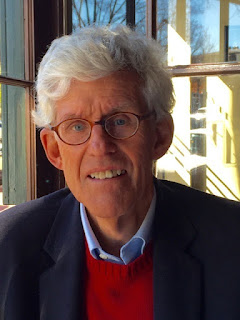 Kevin O’Connell is a native of New York City and the descendant of a young officer of what had—from 1690 to 1792—been the Irish Brigade of the French Army, believed to have arrived in French Canada following the execution of Queen Marie Antoinette in October of 1793. He holds both Irish and American citizenship.

A lifelong personal and scholarly interest in the history of eighteenth-century Ireland, as well as that of his extended family, led O’Connell to create his first book, Beyond Derrynane, which will, together with Two Journeys Home and the two books to follow, comprise the Derrynane Saga.

The father of five children and grandfather of ten, he and his wife, Laurette, live with their golden retriever, Katie, near Annapolis, Maryland.

click on the banner to see more stops on this tour

O’Connell is a fantastic storyteller. His prose is so rich and beautiful it is a joy to read. The story is compelling and the characters memorable – all the more so because they are based on real people. . . I am Irish but I did not know about this piece of Irish history. It is fascinating but historical fiction at the same time . . . Highly recommended for historical fiction lovers!

I enjoyed the first part of the Saga awhile back . . . (and) couldn’t wait to continue the story of Eileen and her family . . . this author really does have a way with words. The world and the characters are so vivid . . . Overall, I was hooked from page one. I honestly think that (Two Journeys Home) was better than (Beyond Derrynane) – which is rare. The characters and world-building was done in such a beautiful manner . . . I can’t wait for the next one . . .

Two Journeys Home: A Novel of Eighteenth Century Europe . . . is a gripping story that will transport the reader back in time, a story with a strong setting and compelling characters . . . a sensational romance, betrayal, family drama and intrigue . . . The plot is so complex that I find it hard to offer a summary in a few lines, but it is intriguing and it holds many surprises . . . great writing. Kevin O’Connell’s prose is crisp and highly descriptive. I was delighted (by) . . . how he builds the setting, offering . . . powerful images of places, exploring cultural traits and unveiling the political climate of the time . . . The conflict is (as well-developed as the characters) and it is a powerful ingredient that moves the plot forward . . . an absorbing and intelligently-crafted historical novel . . . .

(c) Divine Zapa for Readers’ Favourite
Posted by Margaret @ JustOneMoreChapter at 9:44 AM