Review/Giveaway: Next Year in Havana by Chanel Cleeton 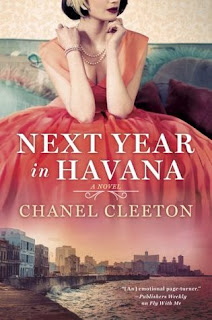 After the death of her beloved grandmother, a Cuban-American woman travels to Havana, where she discovers the roots of her identity--and unearths a family secret hidden since the revolution...

Havana, 1958. The daughter of a sugar baron, nineteen-year-old Elisa Perez is part of Cuba's high society, where she is largely sheltered from the country's growing political unrest--until she embarks on a clandestine affair with a passionate revolutionary...

Miami, 2017. Freelance writer Marisol Ferrera grew up hearing romantic stories of Cuba from her late grandmother Elisa, who was forced to flee with her family during the revolution. Elisa's last wish was for Marisol to scatter her ashes in the country of her birth.

Arriving in Havana, Marisol comes face-to-face with the contrast of Cuba's tropical, timeless beauty and its perilous political climate. When more family history comes to light and Marisol finds herself attracted to a man with secrets of his own, she'll need the lessons of her grandmother's past to help her understand the true meaning of courage.


Kindle version, 394 pages
Published February 6th 2018
by Penguin/Berkley
****
Next Year in Havana is a dual timeperiod story, with one taking place current day and the other in 1958 as Castro takes control of the island. One thing that makes a book extra special for me is when they revolve around places that I have been to, such is the case here. I have been to both Santa Clara and Varadero as well as visited the memorial of Che, making it very easy for me to rekindle my feelings of those trips. Even if I have not been to those places the author did a great job of putting me there with vivid descriptions - from the landscape, food and lifestyles bringing this story to life.

The author doesn’t hold back  but tells it like it is (was). To be honest I really didn’t know what took place that put Castro in control and how it came about. Told in first person pov (my favorite), where I can get inside their heads (and hearts) to really feel the story.

Cleeton is a new author to me, and definitely one I will read more of.  Next Year in Havana is a story of love and lose, of survival and hope, full of family secrets that tug at your heart strings while opening your eyes to Cuba’s history. One that will stay with me and has me anxious for Beatriz's story (sister of Elisa).


Thank you to the author for reaching out to me with an advances copy in exchange for an honest review. 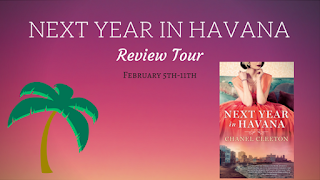 Originally from Florida, Chanel Cleeton grew up on stories of her family's exodus from Cuba following the events of the Cuban Revolution.

Her passion for politics and history continued during her years spent studying in England where she earned a bachelor's degree in International Relations from Richmond, The American International University in London and a master's degree in Global Politics from the London School of Economics & Political Science.

Chanel also received her Juris Doctor from the University of South Carolina School of Law. She loves to travel and has lived in the Caribbean, Europe, and Asia.

a Rafflecopter giveaway
Posted by Margaret @ JustOneMoreChapter at 8:57 AM