Review: With You Always (Orphan Train #1) by Jody Hedlund 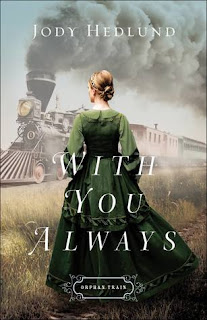 When a financial crisis in 1850s New York leaves three orphaned sisters nearly destitute, the oldest, Elise Neumann, knows she must take action. She's had experience as a seamstress, and the New York Children's Aid Society has established a special service: placing out seamstresses and trade girls. Even though Elise doesn't want to leave her sisters for a job in Illinois, she realizes this may be their last chance.

The son of one of New York City's wealthiest entrepreneurs, Thornton Quincy faces a dilemma. His father is dying, and in order to decide which of his sons will inherit everything, he is requiring them to do two things in six months: build a sustainable town along the Illinois Central Railroad, and get married. Thornton is tired of standing in his twin brother's shadow and is determined to win his father's challenge. He doesn't plan on meeting a feisty young woman on his way west, though.


The first book in Jody Hedlund's Orphan Train series was released last month. Hedlund is a new author to me, I've seen her books around and jumped at the chance to review this one.


One of the things I really enjoyed here was the historical aspect.  I didn't know the role the New York City's Children's Aid Society played nor did I know about the financial crisis that hit New York City in the 1850's. Times were desperate and if you couldn't work where you lived it made sense to go where the jobs were. I had always assumed it was just orphan's sent west but I guess women went also. The author clearly portrayed the desperation of those in the city seeking to make a better life not just for themselves but to support family, there was not social assistance, everyone was left to their own devices.  Life just seemed to be about survival..


Even though I found the story line predictable I still enjoyed watching events unfold.  At times I found myself wanting to spend more time with some of the secondary characters, but given this is book 1 I am hoping to see more as the series progresses.


With You Always is a story of survival, determination, romance and faith.  Definitely an author I will read more of.