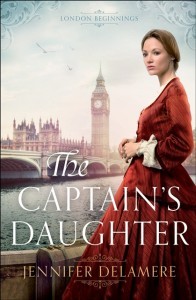 When a series of circumstances beyond her control leave Rosalyn Bernay alone and penniless in London, she chances upon a job backstage at a theater which is presenting the most popular show in London. A talented musician and singer, she feels immediately at home and soon becomes enthralled with the idea of pursuing a career on the stage.

An injury during a skirmish in India has forced Nate Moran out of the army until he recovers. Filling his time at a stable of horses for hire in London, he has also spent the past two months working nights as a stagehand, filling in for his injured brother. Although he’s glad he can help his family through a tough time, he is counting the days until he can rejoin his regiment. London holds bitter memories for him that he is anxious to escape. But then he meets the beautiful woman who has found a new lease on life in the very place Nate can’t wait to leave behind.

Jennifer Delamere is a new-to-me author, The Captain's Daughter is the start of her London Beginning's series.

The 1800's in London is a time I rarely venture into that often, which is why I was keen to read this one (broaden my horizons). It's Victorian England with Gilbert & Sullivan, the HMS Pinafore is on stage as well as Pirates of the Penzance featured here. I hope to rectify my ignorance of this two musical in the very near future.

Newly arrived in London Rosalyn Bernay finds herself homeless, penniless and doesn't know where to turn. Through a series of chance encounters she lands a job back stage. Nate Moran also works backstage and trying to overcome a past before he can resume his army career in India.

Both Rosalyn and Nate are likable characters, the author did a great job of character development, they were authentic making it a pleasure to read. On one hand where Nate is knowledgeable in ways of the world, Rosalyn is naive and too trusting.  This is Christian Fiction where faith plays a large role, as Rosalyn struggles with life she talks to God in a realistic manner and trusts in Him to help her.

I really enjoyed the historical elements here, from the Gilbert & Sullivan musicals to Rosalyn growing up in one of George Muller's orphanages to society life in the Victorian era.  With Author's Notes at the end it was interesting to see some of the characters were based on real historical people and events.

With a visit by Rosalyn's sister Lucy I was given a glimpse into the next book in this series, The Heart's Appeal (releases March 2018). 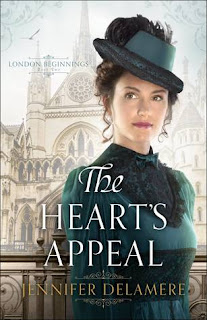 click on cover to take you to the Goodreads page


This is definitely a series I recommend.

"Book has been provided courtesy of Baker Publishing Group and Graf-Martin Communications, Inc."
Posted by Margaret @ JustOneMoreChapter at 2:32 PM