Review: The Library of Light and Shadow (Daughters of La Lune #3) by M.J. Rose 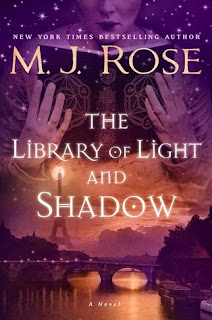 In this riveting and richly drawn novel from “one of the master storytellers of historical fiction” (New York Times bestseller Beatriz Williams), a talented young artist flees New York for Paris after one of her scandalous drawings reveals a dark secret—and triggers a terrible tragedy.

In the wake of a dark and brutal World War, the glitz and glamour of 1925 Manhattan shine like a beacon for the high society set, which is desperate to keep their gaze firmly fixed to the future. But Delphine Duplessi sees more than most. At a time in her career when she could easily be unknown and penniless, like so many of her classmates from L’École de Beaux Arts, in America she has gained notoriety for her stunning “shadow portraits” that frequently expose her subjects’ most scandalous secrets—for better or for worse. Most nights Delphine doesn’t mind that her gift has become mere entertainment—a party trick—for the fashionable crowd. Though her ancestor La Lune, the legendary sixteenth-century courtesan and—like Delphine—a witch, might have thought differently.

Then, on a snowy night in February, in a penthouse high above Fifth Avenue, Delphine’s mystical talent leads to a tragedy between two brothers. Horrified, she renounces her gift.

Devastated and disconsolate, Delphine returns to her old life in the south of France where Picasso, Matisse, and the Fitzgeralds are summering. There, Delphine is thrust into recapturing the past. First by her charismatic twin brother and business manager Sebastian in his attempts to cajole her back to work and into co-dependence, then by the world famous opera singer Emma Calvé, who is obsessed with the centuries-old Book of Abraham, written by the fourteenth-century alchemist Nicolas Flamel. And finally by her ex-lover Mathieu, who is determined to lure her back into his arms, unaware of the danger that had led Delphine to flee Paris for New York five years before.

Trapped in an ancient chateau where hidden knowledge lurks in the shadows, Delphine questions and in many ways rejects what and who she loves the most—her art, her magick, her family, her brother, and Mathieu—as she tries to finally accept them as the gifts they are and to shed her fear of loving and living with her eyes wide open.

MJ Rose is my go to for some yummy supernatural historical fiction entertainment.  She knows how to weave those 2 elements together to dish out unique and intriguing stories.  My first experience was with her Reincarnation Series (book 5 -Seduction) and I haven't looked back but rather wait in eager anticipation for her next.

The Library of Light and Shadow is book 3 in her Daughters of La Lune series and while you don't have to read the first 2 to appreciate this one I recommend it because they are really good.

What I have come to love and appreciate is the authors talent for original story lines.  How she takes real historical figures, puts them in print with a plot so engrossing that I have a hard time putting the book down.  Which is exactly what happened here. Each female in the family has a unique talent and for Delphine she can glimpse into the soul of subjects she puts to canvas, unfortunately her life takes a turn for the worst when tragedy strikes.


"I was not just an artist. I was a woman who had been blinded as a child and whose sight had been brought back by magick. And in the process, I had been given a gift--or, depending on your point of view, a curse. I had the ability not just to see people for who they were but also to see the secrets they harbored. The darkest, most hidden desires of their souls."

The year is 1925, the world is still bouncing back from World War 1 with lavish and supernatural distractions.  The author created a vivid look at the time and setting, there was depth of character and a poetic feel to her writing.  A fine balance between real and magick making everything plausible and I loved the direction the story went and the ending. With mystery, suspense, romance and betrayal MJ Rose has delivered yet again.  Definiely one I highly recommend.

Thanks to Atria Books (via Netgalley) for an ARC.

Posted by Margaret @ JustOneMoreChapter at 11:23 PM