Today I had planned on reviewing this book, but life just got in the way and I haven't had a chance to finish it yet.  Instead I will showcase The Hidden Thread which released on May 1st, 2017.


The Hidden Thread is a breathtaking novel about the intricate craft of silk and the heartbreak of forbidden love. 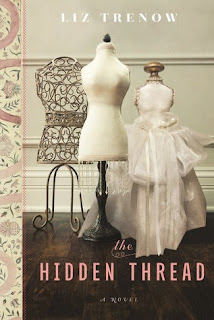 When Anna Butterfield's mother dies, she's sent to live with her uncle, a silk merchant in London, to make a good match and provide for her father and sister.

A chance encounter with a local silk weaver, French immigrant Henri, throws her from her privileged upbringing to the darker, dangerous world of London's silk trade. Henri is working on his 'master piece' to make his name as a master silk weaver; Anna meanwhile is struggling against the constraints of her family and longing to become an artist. Henri realizes that Anna's designs could lift his work above the ordinary, and give them both an opportunity for freedom . . .

This is a charming story of illicit romance, set against the world of the burgeoning silk trade in 18th century Spitalfields - a time of religious persecution, mass migration, racial tension and wage riots, and ideas of what was considered 'proper' for women.


Posted by Margaret @ JustOneMoreChapter at 7:23 PM