Review: The Wonder by Emma Donoghue 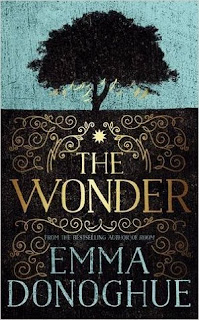 An eleven-year-old girl stops eating, but remains miraculously alive and well. A nurse, sent to investigate whether she is a fraud, meets a journalist hungry for a story.

Set in the Irish Midlands in the 1850s, The Wonder—inspired by numerous European and North American cases of “fasting girls” between the sixteenth century and the twentieth—is a psychological thriller about a child’s murder threatening to happen in slow motion before our eyes. Pitting all the seductions of fundamentalism against sense and love, it is a searing examination of what nourishes us, body and soul.

This is a book I have been wanting to read for a while, I have never read anything by Emma Donahue but I have heard many good things about her books.

The Wonder begins as nurse Lib makes her way to a small Irish Village, she is hired to watch over Anna, a young 11-year-old who has supposedly not eaten for four months and does not show signs of it, her task is to see if this is true or if someone is secretly feeding her.

The first part of the book was interesting enough as we meet the players and get a good sense of the landscape and the family members involved. But I really struggled with the next bit as I found it a bit dry and flat to the point where I was ready to give up. But I did something I very rarely do and that is look at other reviews before I finished it.  A number of them said the book picks up in the last third or so I persevered and got to that point, then I could not put the book down.

There is a lot of emotion in the story whether it be Nurse Lib, Anna's mother, the Sister or the reporter you can feel the tension in the air as they all have different reasons for wanting to be close to Anna. Superstition and religious convictions plays a big role here as does skepticism. Like I said it was the last part of the book that I found most interesting and the ending was satisfying even if somewhat improbable.

I will read more by this author, it wasn't hard to feel her dedication to this story and amount of research also.


This book was from my personal library and part of my 'reading off my TBR' challenge for 2017.
Posted by Margaret @ JustOneMoreChapter at 11:37 PM