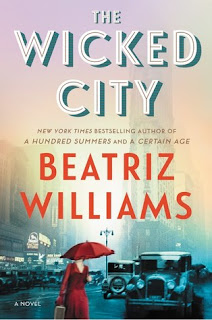 New York Times bestselling author Beatriz Williams recreates the New York City of A Certain Age in this deliciously spicy adventure that mixes past and present and centers on a Jazz Age love triangle involving a rugged Prohibition agent, a saucy redheaded flapper, and a debonair Princetonian from a wealthy family.

When she discovers her husband cheating, Ella Hawthorne impulsively moves out of their SoHo loft and into a small apartment in an old Greenwich Village building. Her surprisingly attractive new neighbor, Hector, warns her to stay out of the basement at night. Tenants have reported strange noises after midnight—laughter, clinking glasses, jazz piano—even though the space has been empty for decades. Back in the Roaring Twenties, the place hid a speakeasy.

In 1924, Geneva "Gin" Kelly, a smart-mouthed flapper from the hills of western Maryland, is a regular at this Village hideaway known as the Christopher Club. Caught up in a raid, Gin becomes entangled with Prohibition enforcement agent Oliver Anson, who persuades her to help him catch her stepfather Duke Kelly, one of Appalachia’s most notorious bootleggers.

Headstrong and independent, Gin is no weak-kneed fool. So how can she be falling in love with the taciturn, straight-arrow Revenue agent when she’s got Princeton boy Billy Marshall, the dashing son of society doyenne Theresa Marshall, begging to make an honest woman of her? While anything goes in the Roaring Twenties, Gin’s adventures will shake proper Manhattan society to its foundations, exposing secrets that shock even this free-spirited redhead—secrets that will echo from Park Avenue to the hollers of her Southern hometown.

As Ella discovers more about the basement speakeasy, she becomes inspired by the spirit of her exuberant predecessor, and decides to live with abandon in the wicked city too. . . .

I am familiar with two previous books by Beatriz Williams, The Secret Life of Violet Grant and Along the Infinite Sea, both audio reads for me and I loved them. Her writing style, with its whimsical tone, witty descriptions and entertaining dialogue works perfectly in that format. Written in first people made it feel like the characters were right there telling me their story. I was a little nervous reading The Wicked City wondering whether it would yield the same feelings. Once I finished the first chapter, as Ella moves into her new apartment and sets about to do laundry, well it reminded me of why I loved her previous books.

Most of the story takes place in the past time period, the Roaring Twenties which is a time I haven't really read much about and nothing involving the Prohibition Era.  There really isn't much for me to say about the plot since the synopsis does a great job doing that.

Gin (Geneva) is an interesting and likeable gal (as I find all of Williams characters to be), her background story is slowly revealed and I could see where she was coming from and what made her tick.

While the reader gets to know Ella and another interesting storyline is revealed a connection to the Schuyler girls from the author's previous series takes shape.

The conclusion here was satisfying on one hand but also left the door open for the sequel, Cocoa Beach which I believe is being released mid 2017.  I am anxious to read it since the author has made me interested in what happens next for Ella and Geneva and her prose is entertaining and captivating.

Thank you to the publisher for an advanced copy (via Edelweiss).

Posted by Margaret @ JustOneMoreChapter at 8:41 PM