Sacrifice: Book One of y Ddraig (The Dragons of Brython) by Gwendolyn Beynon 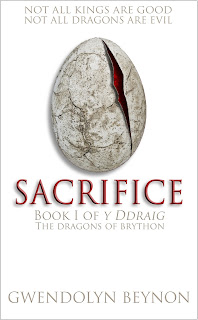 Melangell is a ‘Lifebringer’, a dragon-maiden learning to protect one of the land’s most ancient mysteries, y Ddraig. She expects to pass her years as have a score of teachers before her—sequestered, safeguarding an egg that barely moves from year to year, never using the deadly and secret skills she has been taught. But the King’s relentless pursuit of this most holy relic throws her into the middle of war and though she is not yet adept Melangell must enter captivity with the egg to defend the sleeping dragonling within.

Her abductor is Cai ap Cynyr—fierce warrior, loyal brother and sword-arm to the high Chieftain, Artwr. He has been scouring the land for the relics Artwr demands to ensure triumph against the Angles invading from the east. Cai uses the Lifebringer’s mystique to master his armsmen, but when he spirits Melangell and the dragon egg further into seclusion, she grows intrigued by her captor. But she is a Lifebringer—sworn only to y Ddraig—and Cai must deliver the dragonling to Artwr to at last drag himself out of his legendary brother’s deep shadow.

And all the while, the egg readies itself to emerge…


*Sacrifice is the first in a series of three books based around y Ddraig (the Dragon) set in sixth-century Arthurian Wales, featuring characters based on Welsh myth, literature and/or history.

paperback provided as part of tour
****

I am a big fan of historical fiction and tend to shy away from fantasy novels. However I do make exceptions every once in a while such is the case with Sacrifice.  Taking place in the fifth century during the Arthurian era I was keen to read this book.  Having an interest in Arthur but never really pursuing that desire, I jumped at the chance to be part of this tour. Sacrifice is the book in a planned trilogy and I was impressed with this book.

Melangell is a likeable character, given what she endures, especially as she is introduced to the reader, it isn't hard to feel compassion and connect with her.  The desire to know more about her, the way of  life for a Lifebringer and see where destiny takes her kept me reading and genuinely interested.  Though sometimes a little slow in places this was a unique storyline.  There are a few scenes of violence making this a novel for a mature audience, however they do reflect the time period and situation.  It is evident the author knows her genre and has a passion for it.

All in all this is a story of sacrifice, adventure, love and standing up for what you believe in.  Thank you for HFVBT for inviting me to be part of this tour, I might have missed this one.  I am not sure when the next book in series will be released, but suffice to say I look forward to reading it. 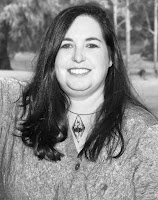 Australian author, Gwendolyn Beynon, comes from a long line of storytellers of Welsh and Cornish stock. She grew up reading romance and fantasy novels but the y Ddraig series is her first foray into historical fantasy.
The idea for the y Ddraig series came while on a pilgrimage to Wales (the land of her fathers) where she was visiting holy wells and ancient yew trees. She grew captivated with the way that the ancient stories of Welsh literature, myth and history still co-existed comfortably in contemporary Cymru, and by the atmosphere of mystery that still exists around much of Wales’ natural spaces.
An Arts graduate from Curtin University (with double-majors in Film and Theatre), Gwen has worked in communications all her life. She sold her first book in 2008 and has been writing for a living with her hounds at her feet and Celtic music as a backdrop ever since.
For more information visit www.yDdraig.com.au. Follow Gwendolyn on Facebook and Goodreads.