From the author of the breathtaking bestsellers Outlander and Dragonfly in Amber, the extraordinary saga continues. 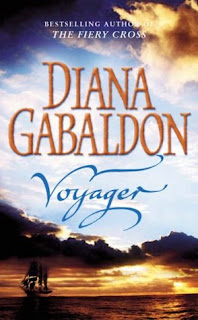 Their passionate encounter happened long ago by whatever measurement Claire Randall took. Two decades before, she had traveled back in time and into the arms of a gallant eighteenth-century Scot named Jamie Fraser. Then she returned to her own century to bear his child, believing him dead in the tragic battle of Culloden. Yet his memory has never lessened its hold on her... and her body still cries out for him in her dreams.

Then Claire discovers that Jamie survived. Torn between returning to him and staying with their daughter in her own era, Claire must choose her destiny. And as time and space come full circle, she must find the courage to face the passion and pain awaiting her...the deadly intrigues raging in a divided Scotland... and the daring voyage into the dark unknown that can reunite or forever doom her timeless love.

I am relatively late to the Outlander party. With 8 books out, plus the Lord John Grey ones and some novella's out there too I have somehow manged thus far to make it spoiler free.  I don't read reviews and limit as much social media as I can, the only I will allow myself to check out is anything to do with the series on TV - I am past that part now.

Voyager is book 3 and comes in at a whopping 1059 pages (the mass paperback version I have anyways).  This is my favorite of the series so far and there is much that I could say about 'this and that' happening but I won't for fear of spoiling the ride for anyone else late to the party.

What I will say though is that I polished this off in just over a week, I couldn't stop reading even in parts with little action I needed to find out what was going on.  It's funny now that I have visual imagines of the cast it adds much to the story.  There are new characters here as well as old ones, new conflicts as well as older ones still.  Lots of surprises, adventures and an ending that will be a great start to the next book.

In June I had the privilege of meeting Diana Gabaldon at the HNS2015 conference.  She was so nice, took time out to talk with me when I asked about the beginnings of this series.  I can't imagine the amount of attention that she gets wherever she goes, throughout the conference she was always smiling and gracious to everyone (even when she sat for 2 hours talking to fans and signing books). 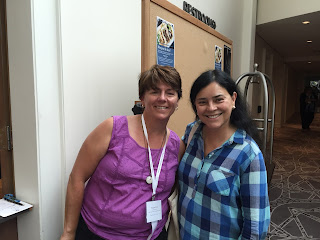 Posted by Margaret @ JustOneMoreChapter at 11:56 AM