Audio Review: A Song for Bellafortuna by Vincent B. “Chip” LoCoco (Blog Tour) 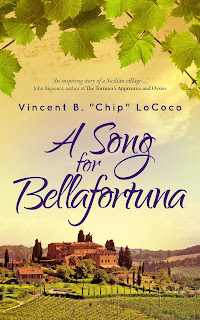 A Song for Bellafortuna is an inspirational Italian Historical Fiction novel concerning a young man’s desire to free his Sicilian village from the domination of one family’s long reign. For years, the beautiful, yet secluded, hilltop village of Bellafortuna, Sicily, was a great producer of wine and olive oil. The entire village prospered. However, after the arrival of the Vasaio family, production dwindles and the villagers soon find themselves in crushing debt to the Vasaios. Only one family in the village remains outside the control of the Vasaios, but the reason haunts Antonio Sanguinetti every day of his life. Antonio is determined to erase this legacy by offering financial and emotional support to his fellow villagers. He introduces them to the choral song from Verdi’s opera, Nabucco, which becomes the rallying cry for the villagers and offers them hope for a better life.

When Antonio’s only son, Giuseppe, discovers his family’s past, he becomes determined to take on the Vasaios and remove them from power. Led by the young Giuseppe, a plan is hatched that could result in either complete freedom for the villagers, or if it fails, forever solidifying the Vasaios’ control.

Find out what happens in A Song for Bellafortuna, a sweeping epic historical fiction tale of love, drama, sacrifice, and redemption, set among the beautiful landscape of Sicily. Already listed by Amazon as a Top New Release in Historical Fiction and Italian Historical Fiction.

For any audio read it is the reader that can make or break a book.  The reader of A Song for Bellafortuna was Bob Neufeld and this was my first experience listening to him.  He did a great job, being a mostly male dominated cast it only stands to reason that a male should narraten he had the old Italian accent that just breathed life into this book.

The story itself I enjoyed, Giuseppe is a likeable character and it wasn't hard to feel his passion for Bellafortuna and his desire to correct a wrong commited so many years ago.  He was sensitive to the plight of others and willing to stand up for what he believed in.

The authors writing style had me visualizing the country side and way of life, thinking this would be a great place to visit.

Even with audio books I still love the authors notes and missed that here.  It would have been nice to hear about the motivations for writing this book and what was fact and what wasn't.

All in all a nice audio read coming in at 8 1/2 hours it isn't long, in fact I would have liked for it to continue a little longer just to find out what happened to some of the characters.

“Vincent B. LoCoco writes a heartwarming piece of historical fiction . . . He captured the essence of the Sicilian culture, especially regarding the value of ancestry and music . . . A Song For Bellafortuna is a beautiful tale of antiquity.” – Readers Favorite 5 Star Review

“The book was a joy to read. It is a wonderful story, told in a magical way.” -Cavaliere Ufficiale Aldo Mancusi, President of the Enrico Caruso Museum of America in New York

“An inspiring story of an Italian village threatened by commerce and saved by opera.” -John Biguenet, author of The Torturer’s Apprentice and Oyster

Award winning and bestselling author, Vincent B. “Chip” LoCoco, lives in New Orleans. His first novel, Tempesta’s Dream – A Story of Love, Friendship and Opera, became an Amazon bestselling novel and was awarded the 2014 Pinnacle Achievement Award in Historical Fiction. Amazon also has named his book as a Top Rated Novel in Italian Historical Fiction.