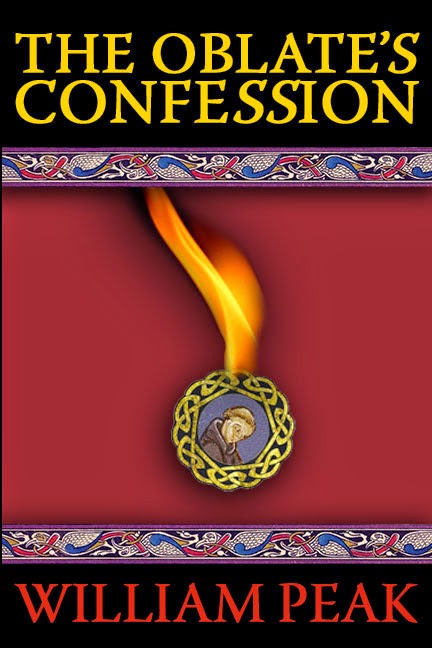 Set in 7th century England, The Oblate’s Confession tells the story of Winwaed, a boy who – in a practice common at the time – is donated by his father to a local monastery.

In a countryside wracked by plague and war, the child comes to serve as a regular messenger between the monastery and a hermit living on a nearby mountain. Missing his father, he finds a surrogate in the hermit, an old man who teaches him woodcraft, the practice of contemplative prayer, and, ultimately, the true meaning of fatherhood. When the boy’s natural father visits the monastery and asks him to pray for the death of his enemy – an enemy who turns out to be the child’s monastic superior – the boy’s life is thrown into turmoil. It is the struggle Winwaed undergoes to answer the questions – Who is my father? Whom am I to obey? – that animates, and finally necessitates, The Oblate’s Confession.

While entirely a work of fiction, the novel’s background is historically accurate: all the kings and queens named really lived, all the political divisions and rivalries actually existed, and each of the plagues that visit the author’s imagined monastery did in fact ravage that long-ago world. In the midst of a tale that touches the human in all of us, readers will find themselves treated to a history of the “Dark Ages” unlike anything available today outside of textbooks and original source material.

Taking place in the 7th century, Winwaed introduces us to life in a monastery.  This isn't a fast paced, action packed book but rather one where I appreciated the pace and got to know Winwaed quite well.  The authors knowledge of this time period is evident, the lifestyle and rituals of the monks I found intriguing.  Describing his childhood now that he is an adult we watch him grow not just physically but spiritually -- with all the soul searching, questions and life in general during this time period.

If you are a medieval fan this book would appeal to you, though some might find the pace slow.

William Peak spent ten years researching and writing The Oblate’s Confession, his debut novel. Based upon the work of one of the great (if less well known) figures of Western European history, the Venerable Bede, Peak’s book is meant to reawaken an interest in that lost and mysterious period of time sometimes called “The Dark Ages.”

Peak received his baccalaureate degree from Washington & Lee University and his master’s from the creative writing program at Hollins University.  He works for the Talbot County Free Library on Maryland’s Eastern Shore.  Thanks to the column he writes for The Star Democrat about life at the library (archived at http://www.tcfl.org/peak/), Peak is regularly greeted on the streets of Easton: “Hey, library guy!”  In his free time he likes to fish and bird and write long love letters to his wife Melissa.

Posted by Margaret @ JustOneMoreChapter at 9:09 AM