Please join T.K. Thorne as she tours with the blogosphere with HF Virtual Book Tours for Noah’s Wife, from December 15-19, and enter to win an autographed copy & magnetic bookmark!
Publication Date: April 17, 2011 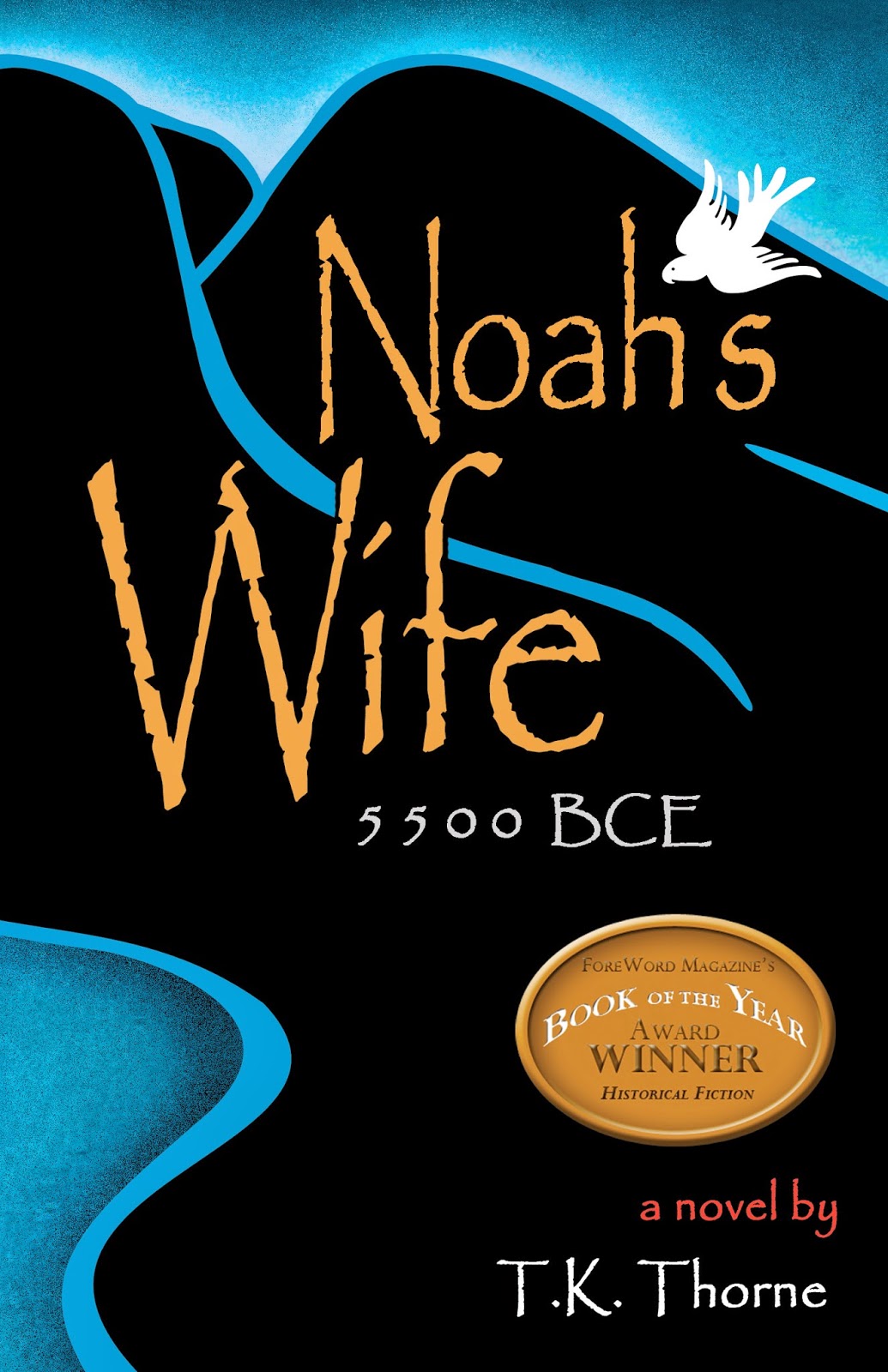 ForeWord Reviews 2009 Historical Fiction BOOK OF THE YEAR.
A novel set in 5500 BCE can’t possibly relate to today’s issues— or can it?

From the perspective of a young girl with what is now known as Aspergers, Thorne weaves twists into the Biblical story, entwining myth, history, and archeological findings with her vivid imagination.
Na’amah wishes only to be a shepherdess on her beloved hills in ancient Turkey— a desire shattered by the hatred of her powerful brother and the love of two men.

Her savant abilities and penchant to speak truth forces her to walk a dangerous path in an age of change— a time of challenge to the goddess’ ancient ways, when cultures clash and the earth itself is unstable. When foreign raiders kidnap her, Na’amah’s journey to escape and return home becomes an attempt to save her people from the disaster only she knows is coming.

A few interesting tidbits:
Scientists (including Robert Ballard, the explorer who found the sunken Titanic) discovered evidence that the Black Sea was once a fresh water lake that flooded in a cataclysmic event around 5500.
The oldest known worshiped deity was female! The role of the feminine in the divine was entwined with early Judaism and keeps reappearing throughout history.

One in every 88 persons has a form of autism. The choice to make Noah’s wife an Asperger savant stemmed from personal experience in the author’s life and gives the story a distinctive perspective.

*** (I liked it)
audiobook provided via tour host

Being raised in the church I am very familiar with the story of Noah's Ark.  Nothing Biblically is mentioned at all about his wife, other than the fact that she existed. She had no name and neither do the daughter in laws.

With Noah's wife we are told the story from her point of view. There is no reference to anything biblical nor is it preachy at all.   But this is a book that stayed true to the time period and environment.  There isn't much talk of Noah's God but there is a lot of talk about the mother goddess.  Meeting Na’amah’s when she is a young girl and getting a glimpse of her home life it wasn't hard to empathize with her plight.  With the synopsis above you can read the direction that this book takes.  It isn't hard to see that the author has done a fair amount of research and it came across in her writing.  Not just her knowledge of the time period but of Asperger's as well and getting into Na'amah's mind.

I listened to the audio version and really enjoyed it. Melissa Carey was the reader, my first time listening to her and she did a wonderful job.

“. . . a terrific storyteller.” — Sena Jeter Naslund Bestselling novelist, Ahab’s Wife, Four Spirits, etc.
“. . . an extraordinary work.” —Dianne Mooney, founder of Southern Living At Home
“. . . a novel of epic sweep, emotional power, and considerable beauty.” —Ron Gholson, The Blount Countian
“. . . awed at Thorne’s ability to work magic with words. Her mastery kept me awake many nights.” —Sherry Kughn, Anniston Star
“Noah’s Wife is one of the best novels I have ever read— and I average about a book a week.” —Barry Marks, Alabama Poetry Book of the Year for Possible Crocodiles
“So compelling and readable. Brava! Excellent! I am basking in the glow of a fascinating, complex read.” —Jane Archer, Professor of English, Birmingham Southern College
“Well-researched, well-written, engaging book that is absolutely one of the best reads I have had in a long time.” —Gail Sheldon, Director Oneonta Public Library
“Masterfully created . It is a MUST READ! Thorne is exceptionally gifted in her sensitivity to life, love, and loss.” —L. Nolan-Ruiz, Editor InternationalBookCafé.com
“A novel of great enchantment, suspense and power . . . looks like a BESTSELLER to me.” —Malcom R. Campbell, Author, Sun Seeker and Jock Stewart and the Missing Sea of Fire
“. . .new depth to an old story in a beautiful novel of truth, love, and survival.” —Irene Latham, author & poet Leaving Gee’s Bend and What Came Before
“. . . with an understanding of what makes us humans tick, Thorne looks at our origins in a brand new way. It’s more Clan of the Cave Bear than theological treatise—and that’s a whole lot more fun!” —John Archibald, Birmingham News
“Not since Mists of Avalon or Ahab’s Wife have I enjoyed such a finely crafted woman’s point of view on an oft-told tale.” —Perle Champion, freelance writer and artist, Alabama Writer’s Forum

TK Thorne was the first Jewish woman to become a police officer in Birmingham, AL (USA). She retired as a captain and currently serves as executive director of the city’s business improvement district—both careers providing fodder for her writing. Her debut novel Noah’s Wife won ForeWord Reviews’ “Book of the Year” for historical fiction. The New York Post featured her book Last Chance for Justice: How Relentless Investigators Uncovered New Evidence Convicting the Birmingham Church Bombers on their “Books You Should Be Reading” list. A short film from her screenplay Six Blocks Wide was a semi-finalist at “A Film for Peace Festival” in Italy. She describes herself as a writer, humanist, dog-mom, horse-servant, and cat-slave.

Her next novel, Angels at the Gate, published by Cappuccino Books, will be released in March 2015. She blogs at www.TKs-tales.com and her web site is www.TKThorne.com.
You can also find her on Facebook, Twitter, Pinterest, and Goodreads.
Sign Up for T.K. Thorne’s newsletter.

To enter to win an Autographed copy of Noah’s Wife & magnetized bookmark, please complete the giveaway form below.

– Giveaway ends at 11:59pm on December 19th. You must be 18 or older to enter.
– Giveaway is open to residents of the US only.
– Only one entry per household.
– All giveaway entrants agree to be honest and not cheat the systems; any suspect of fraud is decided upon by blog/site owner and the sponsor, and entrants may be disqualified at our discretion
– Winner have 48 hours to claim prize or new winner is chosen.

Noah's Wife
Posted by Margaret @ JustOneMoreChapter at 8:31 AM