Chateau of Secrets by Melaine Dobson 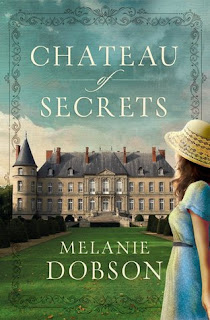 A courageous young noblewoman risks her life to hide French resistance fighters; seventy years later, her granddaughter visits the family’s abandoned chateau and uncovers shocking secrets from the past. Gisèle Duchant guards a secret that could cost her life. Tunnels snake through the hill under her family’s medieval chateau in Normandy. Now, with Hitler’s army bearing down, her brother and several friends are hiding in the tunnels, resisting the German occupation of France.

But when German soldiers take over the family’s château, Gisèle is forced to host them as well—while harboring the resistance fighters right below their feet. Taking in a Jewish friend’s baby, she convinces the Nazis that it is her child, ultimately risking everything for the future of the child. When the German officers begin to suspect her deception, an unlikely hero rescues both her and the child.

A present day story weaves through the past one as Chloe Salvare, Gisèle’s granddaughter, arrives in Normandy. After calling off her engagement with a political candidate, Chloe pays a visit to the chateau to escape publicity and work with a documentary filmmaker, Riley, who has uncovered a fascinating story about Jews serving in Hitler’s army. Riley wants to research Chloe’s family history and the lives that were saved in the tunnels under their house in Normandy. Chloe is floored—her family isn’t Jewish, for one thing, and she doesn’t know anything about tunnels or the history of the house. But as she begins to explore the dark and winding passageways beneath the chateau, nothing can prepare her for the shock of what she and Riley discover…

With emotion and intrigue, Melanie Dobson brings World War II France to life in this beautiful novel about war, family, sacrifice, and the secrets of the past.


Expected publication: May 13th 2014 by Howard Books
(my copy received from netgalley for an honest review)

"Courage doesn't mean you stop being afraid...It means you continue to fight, even when you're terrified."

This is my first book by Melanie Dobson and I have to say that I was very impressed.  I love dual time period stories, this one alternated between World War II and present day. This story had me engaged right from the beginning, the authors writing style made it easy to get lost in this saga.  There is a lot going on here, drama, mystery, suspense, romance, deception and secrets to name just a few.

Beginning when France is invaded by the Germans we meet Gisele Duchant, a brave and caring young woman who is forced into the role of host to the Germans when her home is taken over by them.  As you can tell from the synopsis above she was keeper of secrets that once revealed had the power to destroy. Fast forward 70 years and her granddaughter, Chloe Salvare visits the chateau and uncovers pieces of her family's past that are shocking.

The transition between the two time periods was easy to follow and usually had me wanting to read more, love little cliffhangers.  It was easy to get acquainted with Gisele and Chloe during this book and was a little glum to have to bid them farewell,  in my opinion that means the author did her job in creating characters and a story to leave this kind of affect on her readers.  Well done Melanie Dobson, I will be on the lookout for more of your books.

This book reminded me of Kate Morton, who is one of my favorite authors, and will appeal to those that like HF taking place in France and during WWII.
Posted by Margaret @ JustOneMoreChapter at 11:33 PM