Spells for Forgetting by Adrienne Young 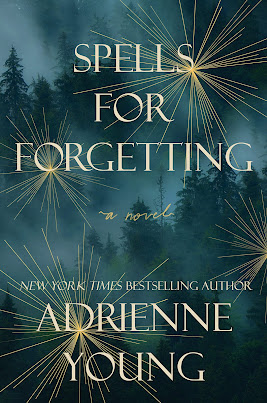 A deeply atmospheric story about ancestral magic, an unsolved murder, and a second chance at true love.

Emery Blackwood’s life changed forever the night her best friend was found dead and the love of her life, August Salt, was accused of murdering her. Years later, she is doing what her teenage self swore she never would: living a quiet existence on the misty, remote shores of Saoirse Island and running the family’s business, Blackwood’s Tea Shoppe Herbal Tonics & Tea Leaf Readings.

But when the island, rooted in folklore and magic, begins to show signs of strange happenings, Emery knows that something is coming. The morning she wakes to find that every single tree on Saoirse has turned color in a single night, August returns for the first time in fourteen years and unearths the past that the town has tried desperately to forget.

August knows he is not welcome on Saiorse, not after the night everything changed. As a fire raged on at the Salt family orchard, Lily Morgan was found dead in the dark woods, shaking the bedrock of their tight-knit community and branding August a murderer. When he returns to bury his mother’s ashes, he must confront the people who turned their backs on him and face the one wound from his past that has never healed—Emery.

The town has more than one reason to want August gone, and the emergence of deep betrayals and hidden promises spanning generations threaten to reveal the truth behind Lily’s mysterious death once and for all.

Hardcover, 352 pages
Published September 27th 2022
by Delacorte Press
2.5/5 stars
This was one of those books that grabbed me with the cover, isn't it gorgeous! I have heard of Adrienne Young, her YA books are quite popular, I have wanted to read her for a while. Spells for Forgetting is her first adult book though at times it does have a YA feel to it. Be forewarned that I am going against the flow when it comes to my thoughts.
It is the summer of their 18th year when this group of 4 is shattered when Lily‘s body is found in a burned out apple orchard. August is the prime suspect, in the middle of the night he and his mother steal away from the island to begin fresh in mainland Oregon. Forced to come back 14 years later, per his mother's request, August returns to the island he swore never to set foot on again.

The blurb sound very enticing, with an unsolved murder, shattered love and betrayal.  But what follows is a story with many layers, points of view and suspicion along with a tiny smattering of mysticism. For me I found this to be a slow paced read. Though the majority of this book is told by Emery and August, there are other voices popping up. It does jump around in time, and the chapter headings make that perfectly clear, but sometimes the memory part within don’t always flow smoothly. The story itself was very slow paced, and it wasn’t until the last hundred pages were things really picked up and I couldn’t put down the book, the suspense had me reading. Thankfully, they're shorter chapters, making it easy to read just one more chapter (pun intended).

Those loast 100 pages had me bumping this up to a 3 star read, but sadly the ending dropped it back to 2.5. I was not satisfied with the conclusion, it left too many things hanging with unanswered questions.  Unless the author plans on a sequel, there I get it.

Spells for Forgetting is a story of young love, family, heritage, and community. Like I said, though this book didn’t work for me, it did for a lot of other reads.

This book was part of my 2022 reading off my shelf challenge.
Posted by Margaret @ JustOneMoreChapter at 2:57 PM

Email ThisBlogThis!Share to TwitterShare to FacebookShare to Pinterest
Labels: 2022, 2022 Reading off my shelf, Adrienne Young, New to me author