Meet Me in the Middle by Alex Light 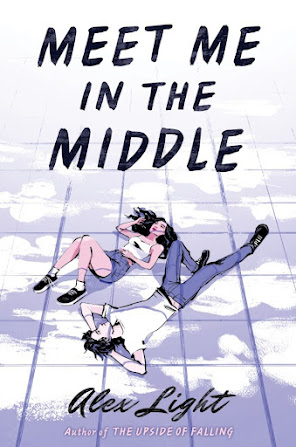 Eden had her best friend Katie—she didn’t need anyone else. But then there was Truman.

Katie’s older brother, the artist. The recluse. The boy with the innocent smile and the dangerous eyes.

Eden had never really known Truman—not until the night of Katie’s accident. That was the night they’d finally let each other into their orbits—only to have the sky come crashing down on them.

With Katie in the hospital and Truman fleeing from his grief without a word, Eden is left alone to grapple with her own pain. But when Truman returns to the city, can Eden let him back into her life knowing that their first kiss is what tore their world apart?

Wattpad superstar Alex Light is back with another poignant romance perfect for fans of Jennifer Dugan and Laura Taylor Namey.

Paperback, 384 pages
Published July 12th 2022 by
Harperteen
3/5 stars
Alex Light is a new to me author.  This book released back in July and I was lucky enough to win an ARC from HarperTeen.
Told from 2 povs, Eden and Truman, both dealing with guilt over a tragic accident that sends Eden's best friend and Truman's younger sister to the hospital.  Five months later, still unconscious Katie clings to life.  What follows is Eden and Truman reconnecting and their journey through depression, grief and guilt.
This was a slow paced story, repetitive at times as both tell their story both before and after the accident. It was an emotional story and brought to life how unique this process is.  Everyone handles grief and guilt differently which was showcased here. Well done Light for writing a sensitive story with some serious subject matter.

Posted by Margaret @ JustOneMoreChapter at 8:45 PM

Email ThisBlogThis!Share to TwitterShare to FacebookShare to Pinterest
Labels: 2022, 2022 Reading off my shelf, Alex Light, ARC, Harper Collins, New to me author