And There He Kept Her by Joshua Moehling 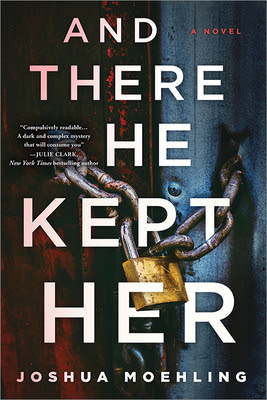 They thought he was a helpless old man. They were wrong.

When two teenagers break into a house on a remote lake in search of prescription drugs, what starts as a simple burglary turns into a nightmare for all involved. Emmett Burr has secrets he's been keeping in his basement for more than two decades, and he'll do anything to keep his past from being revealed. As he gets the upper hand on his tormentors, the lines blur between victim, abuser, and protector.

Personal tragedy has sent former police officer Ben Packard back to the small Minnesota town of Sandy Lake in search of a fresh start. Now a sheriff's deputy, Packard is leading the investigation into the missing teens, motivated by a family connection. As clues dry up and time runs out to save them, Packard is forced to reveal his own secrets and dig deep to uncover the dark past of the place he now calls home.

Unrelentingly suspenseful and written with a piercing gaze into the dark depths of the human soul, And There He Kept Her is a thrilling page-turner that introduces readers to a complicated new hero and forces us to consider the true nature of evil.
Kindle, 320 pages
Expected publication: June 14th 2022
by Poisoned Pen Press
3.5/5 stars
Debut author Joshua Moeling has penned a novel that started with a bang (literally) and ended with a splash. So much happened in between. I'm not usually a fan of books where I know the bad guy from the start, but here it worked.

We don’t know the why of what happened or even the other who’s but what follows is a twisted journey both to the past and through the present. Between feuding neighbours, dysfunctional families, love & loss and drug use I was kept on my toes with a vast cast.

It’s a disturbing story with lots of backstory into the life of Ben Packard and has the feels of the start of a new series. The characters here are so flawed both through their own doing, society and privilege. The story moved along at a nice pace but knowing so much at the beginning kinda took some of the suspense away.

While this wasn’t the page turned I expected it was an entertaining read.

My thanks to Poisoned Pen Press for an e-arc in exchange for a honest review.
Posted by Margaret @ JustOneMoreChapter at 9:42 AM

Email ThisBlogThis!Share to TwitterShare to FacebookShare to Pinterest
Labels: 2022, Joshau Moehling, Netgalley, New to me author