A Rip Through Time by Time Kelley Armstrong 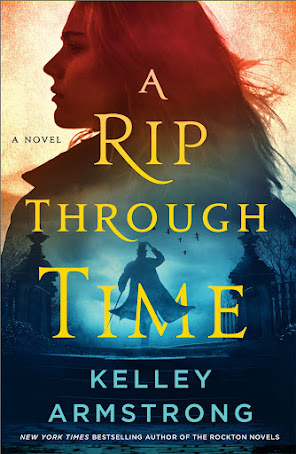 In this series debut from New York Times bestselling author Kelley Armstrong, a modern-day homicide detective finds herself in Victorian Scotland—in an unfamiliar body—with a killer on the loose.

May 20, 2019: Homicide detective Mallory is in Edinburgh to be with her dying grandmother. While out on a jog one evening, Mallory hears a woman in distress. She’s drawn to an alley, where she is attacked and loses consciousness.

May 20, 1869: Housemaid Catriona Mitchell had been enjoying a half-day off, only to be discovered that night in a lane, where she’d been strangled and left for dead . . . exactly one-hundred-and-fifty years before Mallory was strangled in the same spot.

When Mallory wakes up in Catriona's body in 1869, she must put aside her shock and adjust quickly to the reality: life as a housemaid to an undertaker in Victorian Scotland. She soon discovers that her boss, Dr. Gray, also moonlights as a medical examiner and has just taken on an intriguing case, the strangulation of a young man, similar to the attack on herself. Her only hope is that catching the murderer can lead her back to her modern life . . . before it's too late.

Outlander meets The Alienist in Kelley Armstrong's A Rip Through Time, the first book in this utterly compelling series, mixing romance, mystery, and fantasy with thrilling results.
Kindle Edition, 352 pages
Expected publication May 31, 2022
by Minotaur Books
2.5/5 stars
It has been a long time since I’ve read a Kelley Armstrong book, mostly known for her YA books this I believe is not YA though it does have a YA feel.

I love the cover I think it invokes the time travel feel with a Gothic vibe. I like that the blurb tells readers right away that this is the beginning of a new series, which prepared me for possible cliffhangers and also setting up things for future books. I did not find any indication to say how big this series will be.

I'm just going to forewarn you that I am going against the flow in regards to my thoughts. It is a slow burn story told from the point of view of Mallory, a 30 year old in current time. But as she travels back in time she is 10 years younger. The adjustment of going from a modern day police officer with the world of electronics at her fingertips to a housemaid is, well an adjustment. How she jumped through time was a unique concept that raised the question of what happened to Catriona. Most of the story takes place in Mallory‘s head. We are privy to her thoughts for the majority of the book which I found repetitive as she rehashed so much over and over again.

This was very much a tell story vs show and sometimes that works but for me it didn’t in this instance. Another POV might have been nice to get a break from Mallory and her thinking. There were just too many inconsistencies to name them all.   But I preserved when the last third finally started to pickup with some action and a few questions sorta answered.
I am so disappointed that my feelings didn't jive with most other reviews, but when it became a chore to pick up my kindle that is a tell tale sign that maybe I should give up.
My thanks to Minotaur Books for a digital arc in exchange for a honest review.

Posted by Margaret @ JustOneMoreChapter at 2:15 PM