You Can Never Tell by Sarah Warburton 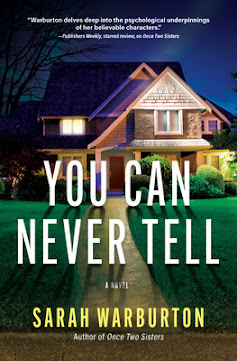 Perfect for fans of Liane Moriarty and Joshilyn Jackson, Sarah Warburton's chilling thriller, inspired by the Moors Murders, explores the twisted side of suburbia.

Framed for embezzlement by her best friend Aimee, museum curator Kacy Tremain and her husband Michael move from New Jersey to a charming Texas suburb to escape their past. Kacy quickly makes new friends--preppy, inscrutable Elizabeth, chatty yet evasive Rahmia, and red-headed, unapologetic Lena. But good friends aren't always what they seem.

As she navigates the unexpectedly cutthroat social scene of her new town, Kacy begins to receive taunting postcards--and worse, discovers cameras hidden in the wall of her home. Lena and her husband, Brady, reassure her that the cameras are just relics of the paranoid previous homeowner . Once the cameras are removed and Kacy's fears are quelled, Kacy and Michael make the happy discovery that they are going to be new parents.

Months after the birth of their daughter, Michael accidentally makes a shocking discovery about Brady's past. And when Lena suddenly goes missing, Kacy and Michael begin to uncover the truth about their neighbors--and it's more terrible than anyone could have imagined.

Interlaced with transcripts of a chilling true crime podcast that follow the tangled threads of the drama, You Can Never Tell is a taut and complex psychological thriller that never lets up until its breathless conclusion.

Kindle, 288 pages
Published August 10, 2021
by Crooked Lane Books
3/5 stars
You Can Never Tell had such a slow burn start that I switched over to the audiobook (via Scribd.)

Having been falsely accused of embezzlement Kacy and husband Michael move across the country for a fresh start. In the first few chapters she comes across as fragile, depressed and unstable but quickly that is shed as they make friends as a couple and Kacy, in her own branches out rather quickly.

Told from Kacy's POV and also including crime podcasts interspersed throughout. These podcasts, while interesting and added a nice change of pace, gave some of the mystery away at the same time it had me wondering how the two story-lines connected. But it wasn’t until  after the half way mark where things really picked up. I wonder if that was a little too late as the rest of the book felt rushed and impulsive.

The ending okay, I was hoping for some twists and even a feeling of satisfaction but that never came. All in all a mystery that wasn’t all that suspenseful and could have been so much more but was still an entertaining read.  Also the blurb gives too much of the story away (just mho.)

My thanks to Crooked Lane Books for a digital copy.
Posted by Margaret @ JustOneMoreChapter at 4:34 PM

Email ThisBlogThis!Share to TwitterShare to FacebookShare to Pinterest
Labels: 2022, Netgalley, New to me author, Sarah Warburton