Destined for You (Ladies of the Lake #1) by Tracie Peterson 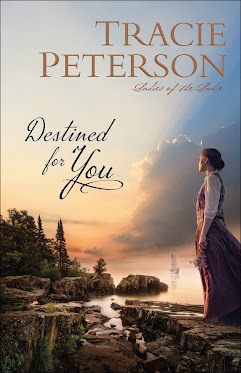 In 1869, Gloriana Womack's family is much smaller since smallpox killed her mother and two of her siblings. She lives in a modest cottage in Duluth, Minnesota, with her father and young brother, and she has dedicated her life to holding her tiny, fractured family together--especially as her father is frequently gone on long fishing trips. Their livelihood may come from the waters of Lake Superior, but storms on the lake can be dangerous, even to those who know it well.

Luke Carson has come to Duluth to help shepherd the arrival of the railroad to the city's port, and he's eager to be reunited with his brother, Scott, who recently moved there with his pregnant wife. Competition for the railroad is fierce, with the neighboring city of Superior, Wisconsin, fighting for the tracks to come through their town instead. But the real danger lies in a resident of Duluth who is determined to have his revenge upon Luke.

When tragedy brings Gloriana and Luke together, they help each other through their grief and soon find their lives inextricably linked. If they survive the trials ahead, could it be possible they've been destined for each other all along?

Paperback, 336 pages
Published March 2nd 2021
by Bethany House Publishers
3/5 stars
I've been wanting to read a Tracie Peterson book for a long time.  When I was offered this book for review I took that as a sign and jumped at the chance.  The cover clinched the deal - isn't it gorgeous?
Destined for You is the first book in the Ladies of the Lake Series, with #2 Forever My Own being released in July.
This book was well written in terms of a good story, the journey for Gloriana, TJ and Luke as they deal with loss and the struggles associated with it.  Their faith was tested again and again.
For me I don't feel that I'm the target audience for this one.  It wasn't as gritty as I like, I didn't feel the depth of character and therefore didn't get that emotional attachment.  As for the story I would say it was a light romance that again I didn't feel.  The conflict with the railway felt just touched upon and the conclusion was uneventful.
All in all for those that like a lighter story about some serious subject matters this would work.  Looking at the ratings I can see that I am in the minority with my thoughts.
"Book has been provided courtesy of Baker Publishing Group
and Graf-Martin Communications, Inc."
Posted by Margaret @ JustOneMoreChapter at 12:11 PM

Email ThisBlogThis!Share to TwitterShare to FacebookShare to Pinterest
Labels: 2021, 2021 Reading Off My Shelf, Christian Fiction, New to me author, NutsaboutBooks, Tracie Peterson