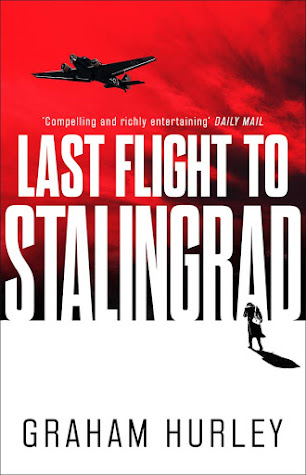 Excerpted from Last Flight to Stalingrad,

Oberstleutnant Georg Messner occasionally wondered whether he’d fallen in love with his boss.

Generaloberst Wolfram von Richthofen was the legendary chief of Fliegerkorps VIII. In half a decade he’d routed the Reich’s enemies in Spain, Poland, France and the Balkans. His Stuka dive bombers, with the terrifying siren he’d invented himself, had become a battlefield code for instant annihilation, and even the vastness of the Soviet Union hadn’t daunted him. On the day German armour poured into Russia, Fliegerkorps VIII had destroyed no less than 1,800 enemy aircraft for the loss of just two planes. Even hardened Luftwaffe veterans couldn’t believe it.

Now, Messner – who served as an aide to Generaloberst Richthofen – was sitting in a draughty tent on a scruffy airfield on the Kerch Peninsula. The meeting had started barely half an hour ago. Messner had flown in last night, anticipating a celebration at the end of Operation Trappenjagd. General Manstein was rumoured to be arriving in time for lunch.

In ten exhausting days of incessant bombing, Richthofen’s Fliegerkorps VIII, working hand in hand with General Manstein’s 11th Army, had kicked open the back door to the priceless Caucasian oilfields. One hundred and seventy thousand Russian soldiers stumbled off into captivity. Two full Soviet armies, plus the greater part of a third, were destroyed. In raid after raid, the Heinkels had seeded the Soviet formations below with the new SD2 fragmentation bombs, tiny eggs that exploded feet above the pale earth and tore men to pieces. Coupled with bigger ordnance, Richthofen called it ‘giant fire magic’.

On the first Sunday of the campaign, most bomber pilots had flown nearly a dozen sorties. A handful had gone three better. Fifteen take-offs. Fifteen landings. All in one day. Unbelievable. This was the way Richthofen organised his campaigns: violence without end, ceaseless pressure, an unrelenting urge to grind the enemy to dust.

The results had been obvious from the air. Towards the end of the first week, personally supervising the carnage from two thousand metres, Richthofen had emerged from his tiny Fieseler Storch to tell Messner that the jaws of Manstein’s trap were about to close around the hapless Slavs. ‘Unless the weather stops us,’ he growled, ‘no Russian will leave the Crimea alive.’

And so it went. By the third week in May, after a difficult winter, the road to the Crimean fortress at Sevastopol lay open to Manstein’s tanks and Richthofen’s marauding bomber crews. After a victory of this magnitude, Germany was once again on course to advance deep into the Russian heartlands. Messner himself was a Berliner and it wasn’t difficult to imagine the relief and rejoicing in his home city. Moscow and Leningrad were still under siege, but the real key surely lay here on the southern flank. The seizure of the oil wells would keep the Panzers rolling east. Grain from Ukraine would fill bellies back home. Yet none of the euphoria Messner had expected was evident around this makeshift table.

Messner had first served under Richthofen half a decade ago in the Condor Legion, fighting the Republican armies in the mountains of northern Spain. He knew how difficult, how outspoken this man could be. He treated superiors and underlings alike with a rough impatience which brooked no excuse when things went wrong. His men feared him, of that there was no doubt, but he brought them comfort as well because he was – more often than not – right.

The story of war, as Messner knew all too well, was the story of things going wrong, but Richthofen had an implacable belief in willpower and the merits of meticulous organisation. In his view there was no such thing as defeat. There’d always be setbacks, certainly, occasions when plans threatened to fall apart, but the men under his command were expected to be masters of both themselves and the battlefield below. For Richthofen, the undisputed Meister of close air support, there was no sweeter word than Schwerpunkt, that carefully plotted moment when irresistible wrath descended on the heads of the enemy and put him on his knees.