Review: Don't Look for Me by Wendy Walker 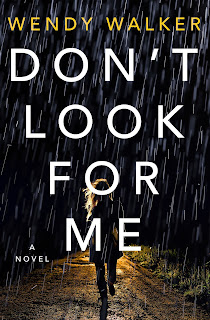 One night, Molly Clarke walked away from her life. The car abandoned miles from home. The note found at a nearby hotel. The shattered family that couldn't be put back together. It happens all the time. Women disappear, desperate to leave their lives behind and start over. She doesn't want to be found. Or at least, that's the story. But is that what really happened to Molly Clarke?

The night Molly disappeared began with a storm, running out of gas, and a man in a truck offering her a ride to town. With him is a little girl who reminds her of the daughter she lost years ago. It feels like a sign. And Molly is overcome with the desire to be home, with her family—no matter how broken it is. She accepts the ride. But when the doors are locked shut, Molly begins to suspect she has made a terrible mistake.

When a new lead comes in after the search has ended, Molly's daughter, Nicole, begins to wonder. Nothing about her mother's disappearance makes sense.

Nicole returns to the small, desolate town where her mother was last seen to find the truth. The locals are kind and eager to help. The innkeeper. The bartender. Even the police. Until secrets begin to reveal themselves and she comes closer to the truth about that night—and the danger surrounding her.

Hardcover, 342 pages
Published September 15th 2020
by St. Martin's Press
4/5 stars
Don't Look for Me is a story of grief and the effect it has on everyone in the family.  Sometimes its just easier to blame somebody else then to deal with it.  So on the 5th anniversary of her daughter's death does Molly Clark deliberately walk away or does something more sinister happen?
Don't Look for Me is a mystery with some unreliable characters. There are a lot of characters to keep straight but it's possible especially as the desire to read just one more chapter was prevalent the whole way through.  With enough red herrings I was kept theorising over and over again.
This is my first time readying Wendy Was, I picked this up from the library after reading rave comments on social media, so fingers crossed that it would live up to the hype.  It did!!  If you are looking for a fast paced mystery I recommend giving this one a turn.
Posted by Margaret @ JustOneMoreChapter at 12:30 AM

Email ThisBlogThis!Share to TwitterShare to FacebookShare to Pinterest
Labels: 2020, Library, New to me author, Wendy Wax