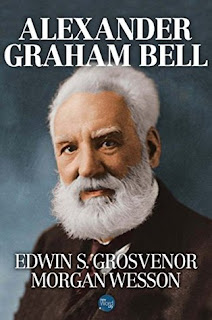 ". . . rarely have inventor and invention been better served than in this book."
– New York Times Book Review

Here, Edwin Grosvenor, American Heritage's publisher and Bell's great-grandson, tells the dramatic story of the race to invent the telephone and how Bell's patent for it would become the most valuable ever issued. He also writes of Bell's other extraordinary inventions: the first transmission of sound over light waves, metal detector, first practical phonograph, and early airplanes, including the first to fly in Canada. And he examines Bell's humanitarian efforts, including support for women's suffrage, civil rights, and speeches about what he warned would be a "greenhouse effect" of pollution causing global warming.

Kindle Edition, 304 pages
Published May 12th 2016
by New Word City, Inc. (first published September 1st 1997)
Audiobook : Narrated by: Donald Corren
Length: 6 hrs and 30 mins
I wanted to read more non fiction in 2020, didn't really happen as this book is only my 2nd one...maybe in 2021.  I was attracted to the life of Alexander Graham Bell not just because his roots are close to home here in Southern Ontario, but rather to know more about him. Knowing next to nothing other then the invention of the telephone I was intrigued to learn more.
The author is the great grandson of Bell which just added that extra spark.  Beginning with Bell's early years in England and Scotland and progressing to his relocation to North America.  I was surprised with all the different things he was involved with and the people he rubbed shoulders with.  I don't recall any of this from history classes, especially how the telephone is the most valuable patent ever issued.  The blurb above lists some of his other accomplishments.
It was a relatively quick read in that the audio was 6 1/2 hours long but it did pack a punch with not just his business adventures but personal life as well.  Not just an entertaining listen but educational without being bogged down with too many details but a great look at the life of Alexander Graham Bell.
My audiobook was from my personal library via Audible.
Posted by Margaret @ JustOneMoreChapter at 9:57 PM