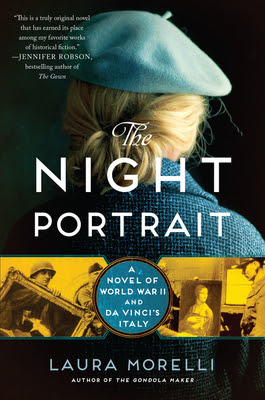 An exciting, dual-timeline historical novel about the creation of one of Leonardo da Vinci's most famous paintings, Portrait of a Lady with an Ermine, and the woman who fought to save it from Nazi destruction during World War II.
Milan, 1492: When a 16-year old beauty becomes the mistress of the Duke of Milan, she must fight for her place in the palace—and against those who want her out. Soon, she finds herself sitting before Leonardo da Vinci, who wants to ensure his own place in the ducal palace by painting his most ambitious portrait to date.
Munich, World War II: After a modest conservator unwittingly places a priceless Italian Renaissance portrait into the hands of a high-ranking Nazi leader, she risks her life to recover it, working with an American soldier, part of the famed Monuments Men team, to get it back.
Two women, separated by 500 years, are swept up in the tide of history as one painting stands at the center of their quests for their own destinies.
Paperback, 496 pages
Expected publication: September 8th 2020
by William Morrow Paperbacks
4.5/5 stars
This is my second book by Laura Morelli, she has written a number of books taking place in Italy - one of my favorite holiday destinations.  These days armchair travel appears to be the norm and this fit the bill nicely.
Yes there are 4 points of view here, it wasn't hard to keep track of, each was unique and interesting.  One just needed to be patient to see how they would intersect.
In 1939 Edith is placed in a position that goes against everything she believes and struggles throughout the war with her actions. She was authentic, well written showing the control the Nazis had over its citizens.
In 1944 Dominic, a US soldier, has a passion for sketching but sees and experiences heartache that leaves him disillusioned. The Monument Men play a part here and I loved that angle.

Leonardo da Vinci leaves Florence behind journeying to Milan where he is commissioned to paint a portrait that plays center stage. I enjoyed learning of his ambitions which weren’t limited to sculptures and paintings.

Cecilia in 1492 has her dowry wasted away and takes matters into her own hands to avoid the nunnery. Only 16 years old she is driven beyond her years.
There are many layers that don't revolve around the painting that reflect what was taking place in Germany to its citizens, especially those deemed flawed. I loved the number of real historical figures included and yes I did google after I finished.
The Night Portrait was a refreshing change of scenery for a WW2 book. It's well written, full of passion and rich in history, which again shows the authors passion for the location and art world.
The Night Portrait releases on Sept 8th and is available for preorder. My thanks to both the publisher and author for a print ARC in exchange for an honest review.
Posted by Margaret @ JustOneMoreChapter at 11:59 PM